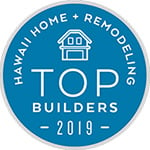 Twelve years after purchasing their charming Kahala home, John and Yoko White realized their modern vision with the help of Barker Kappelle Construction. Though the couple initially purchased the home in 2006, professional obligations rooted them on the Mainland for the next nine years. Seeing the beloved neighborhood community as the property’s greatest asset, the couple was ready to transform the modest 1950s home into a restful resort-themed sanctuary upon their move back to Hawaii in 2017.

The Whites enlisted the help of local design-build firm Barker Kappelle Construction to reimagine the property’s livable space, with the help of architect Paul Sheffield. The result was a collaborative effort, with the full renovation completed in less than 10 months.

The single-story home was reframed and restructured, with a new roof and windows to maximize natural light; the single-walled framework was transformed to include double walls and thicker drywall for better insulation and sound properties. Inside, the cottage-style design features timeless board and batten siding, giving the home a plantation feel. Lofted ceilings add height to common living areas and open up spaces such as the living room, bedrooms and kitchen.

Originally separated by a double door, the kitchen wall was removed to open up the kitchen and create a seamless, expansive common area composed of the kitchen, living room and dining room. A hidden office beside the dining table remains unseen as desired thanks to a faux wall of stacking doors. The far side of the new laundry room was once an exterior storage room, which has been transformed, giving way to an added mud room with exceptional storage as well as a laundry room and third bathroom.

To maximize the space for John and Yoko, a third bedroom was removed to allow for two spacious bedrooms, bathrooms and a small walk-in closet. The extended master bath offers both a large shower and deep bathtub with clean tiles in soothing grays to wash off the day.

Heat was a primary concern for John, who noted Barker Kappelle’s thoughtful attention to detail when it came to cooling down the home. Stacking doors were added for the front and back entries to allow for natural wind flow, as the couple prefers to keep the doors open. Though the home includes central air conditioning, whole house fans were installed throughout the home in the newly lofted ceilings to simultaneously eliminate heat. “It keeps the temperature balanced, drawing the hot air out of the house so it ultimately feels as if you are standing in the shade outside,” Phillip Barker explains.

Now distinguished by a roadside wall, the home is unrecognizable from the street. Barker Kappelle transformed the outdated 1950s style peach aesthetic into a luxurious modern resort-style sanctuary. “The idea was to create a lot of space in a small area and have more room for a yard, so we transformed the front entry to maximize every inch of livable space,” Barker shares.

Elegant entryway details add to the resort feel, including exposed aggregate, lava rock and a rain chain. The L-shaped driveway adjacent to the garage was removed in favor of a pool lined with heat-resistant ceramic tiles that remain cool despite direct sunlight, and accented with decorative Mexican-inspired tiling. Tiki torches and tropical plants were added along the inside of the wall to create a natural canopy for added privacy and shade. “We wanted to create more of a jungle feel in the garden area to make the yard bigger and open everything up,” Barker explains. His firm collaborated with HHF Planners for the landscaping, which was meticulously installed by Akamine Lawn & Landscape, and wraps around the property with tropical plants including rare and colorful varieties of ti leaf, hibiscus, taro, native Hawaiian ferns, pua kenikeni and more.

As the Whites prepare for retirement in their two-bedroom, three-bath home, they are able to truly enjoy their next chapter together. Whether taking a refreshing dip in the pool, keeping cool indoors or waving to passing neighbors from the comfort of their front porch, they are finally home.

Stay connected with ideas that show you care.