The original appeal of this Manoa home is retained through an extensive renovation.

The charm of historic Manoa homes is undeniable. Set in an alluring green valley, sometimes under misty rainbows, the houses here have a certain flair that is often sought after. The owners of one such home — a three-bedroom, two-bath, with plumeria trees out front — were looking to add onto their two-story beauty. The issue with a remodeling project like this, however, is to seamlessly blend the old spaces with the new to maintain an abode’s original appeal.

Nick Tang of Koolau Builders happily accepted this challenge when he and his team were tasked with the addition-plus-renovation project in this lovely, lush neighborhood.

“We wanted to tie it in like it was already there,” Tang says of the two-story addition, which includes a formal dining room, as well as a downstairs suite with a bedroom, bathroom and wet bar. Today, the new space is practically undetectable. Stepping through the double doors and into the foyer, one can’t tell where the original home ends and the addition begins.

“There was a lot of thought going into the design process,” Tang says, explaining the level of detail that goes into getting roof lines to match and ensuring everything flows well. “From the outside, you would never know that it was added.”

The same goes for the interior. Inside, Koolau Builders created a bright new space that, though updated for today’s standards, still gives off the cool, calming feeling characteristic of homes in the area.

In the bathroom, neutral tones continue to reign supreme. The flooring blends flawlessly into the shower tile; the only element that seems to stand out on its own is the large mirror above the vanity.

Koolau Builders also completed a full renovation of the existing kitchen, which is quite spacious. “It was nice to have a larger [than usual] space to work with,” Tang says. “In this case, we were trying to make use of all the space that was there.”

The former kitchen was dated and inefficiently designed. With a few awkward, unused spaces, it was closed off from the main living area. The homeowners wanted to open up the space and allow in more natural light, so Tang eliminated a wall and reconfigured the flooring.

The new kitchen boasts painted white shaker cabinets and cosmopolitan white Caesarstone on the countertops and island. Avila Blanco glazed porcelain tile flooring is of the same hue. A pale blue ceramic tile backsplash adds the slightest pop of color, while a gunmetal bronze chandelier hanging from the coffered ceiling above the island creates a focal point. New stainless steel appliances keep the space looking chic; a cleverly designed open shelf above the oven offers room to store books and other knickknacks.

“It was nice to have a larger [than usual] space to work with…In this case, we were trying to make use of all the space that was there.”

Tang was especially glad to work on this addition/renovation because the homeowners had saved up to complete the project for quite some time and had lots of ideas for their new space. Within about six months, Tang and his team were able to provide the homeowners with the new space they wanted while keeping it looking as though it were part of the original structure. “It looks like it was meant to be,” he says.

Say hello to these trending looks.

Ideas to refresh your outdoor space.

A Newly Built Home Made for All Ages to Enjoy

Paradise is Found in this Hawaii Island Home

This Home’s Outdoor Space is Completely Decked Out

5 Ideas That’ll Increase the Value of Your Home 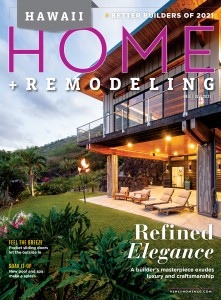