A Renovated Guest Suite Inspired by Sand and Sea

This labor of love is intended to evoke a beachy vacation feel, perfect for entertaining. 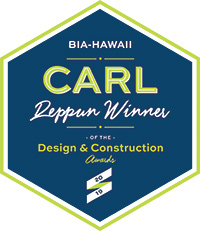 Growing up in Kailua, J.R. Moorhead always knew he wanted to eventually settle down with his family on the Windward Side. Three and a half years ago, it was just his luck, an old friend was selling his home and reached out to offer it to him first. Moorhead happily accepted.

The 70-year-old house was a definite fixer-upper, but perfect for Moorhead, a carpenter by trade and owner of Moorhead & Company Inc., which specializes in home renovations. One of the first spaces to be renovated was the soon-to-be guest suite, with a complete overhaul of the once bare basement garage that the previous owners used as a makeshift living area.

Moorhead and his team had to overcome a lot of challenges before they could start designing: load-bearing walls lacked footing and needed to be restructured, plumbing and electrical had to be made over and something had to be done about a large 14-inch step-up into the kitchen and bathroom. “It wasn’t laid out very well,” says Moorhead.

The construction phase took some time, with Moorhead working on the project in between jobs. In time, he set out to create a one-bedroom luxury suite for hosting and entertaining family and friends.

The newly remodeled guest suite features an open-concept layout, with the living room flowing into the kitchen. Moorhead opted for a single large bedroom, which has its own walk-in closet.

“It was designed for entertaining,” says Moorhead. “There are lots of windows at the front because you can see the ocean, and there’s a nice yard and flowers. It’s a special spot.”

The overall focus was to create a relaxing vacation environment, uniting sand and sea. The light, sandy luxury vinyl flooring is paired with pops of blues and greens, like the gorgeous glass feathered tile kitchen backsplash that mimics sea glass.

In the kitchen, the addition of a large island, with waterfall edges on both sides, serves as a gathering spot. “I love the open feel of the kitchen,” says Moorhead. New appliances include a glass cooktop at the island and a wall-mounted oven in the white shaker-style cabinetry that’s topped with a white quartz countertop. Moorhead added an open shelf in walnut to display art, plants and knickknacks. A teal barn door, painted to match the front door, leads to the bathroom and laundry area.

But what remains as one of the best features of the home is its view. “I love that you can see the sunrise over the ocean,” says Moorhead.

He says it’s the most complicated project that he’s done in his life, and also the most rewarding. “It’s my forever house.”

Connect Your Indoor and Outdoor Spaces for Maximum Enjoyment

Create a Lasting Impression with Windows

Everything You Need to Know Before Getting a Pool