A Renovation Brings Family Closer by Knocking Down Barriers

The original design of this Kailua home was a bit of a mixed plate, says Mike Fairall of Mokulua High Performance Builder. The one-story ranch-style residence had been renovated numerous times by previous owners, resulting in compartmentalized spaces. The layout and cramped rooms, which lacked airflow, made the current owners feel hindered, especially in the heart of the home.

“We wanted to remodel because our family enjoys spending time in and around the kitchen area, but because the kitchen was so compartmentalized — with the four family members around the smaller existing kitchen island — we felt inhibited for space,” says one of the homeowners. Along with these challenges, the home needed an overall update, including new appliances, cabinets and countertops, all of which were several decades old. 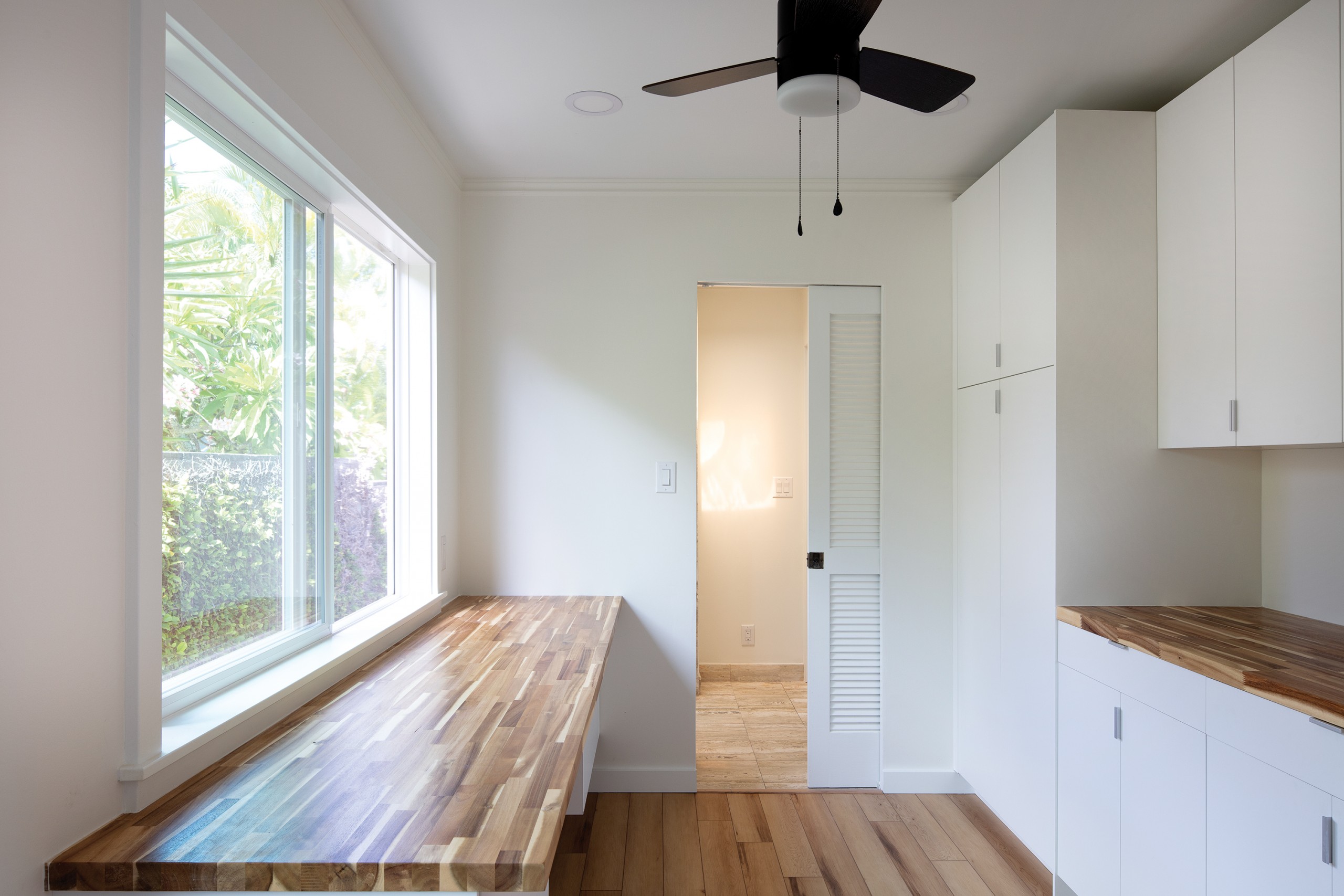 A new built-in office area with a utility counter and new cabinetry adjoins the laundry room, which has a second refrigerator.

The homeowners called upon Blueprint808 and Mokulua High Performance Builder to reimagine their home as a place that the whole family could gather together naturally, whether in the kitchen or in the living area.

“Andrew Forman is known to have a keen eye and ability to create spaces that instill an overall sense of calm through clean lines,” shares the homeowner.

“We also found him to immediately understand our goals for making the kitchen a center of the home, modifying our space to ensure its use could be maximized.”

Blueprint808’s comprehensive services include providing full specifications and assistance with materials procurement, says Forman of Blueprint808. “Through 3D modeling, photo realistic renderings, mood boards, product shopping, budgeting and procuring, the process is comprehensively handed over to the builder to ensure materials arrive on time and on budget.” 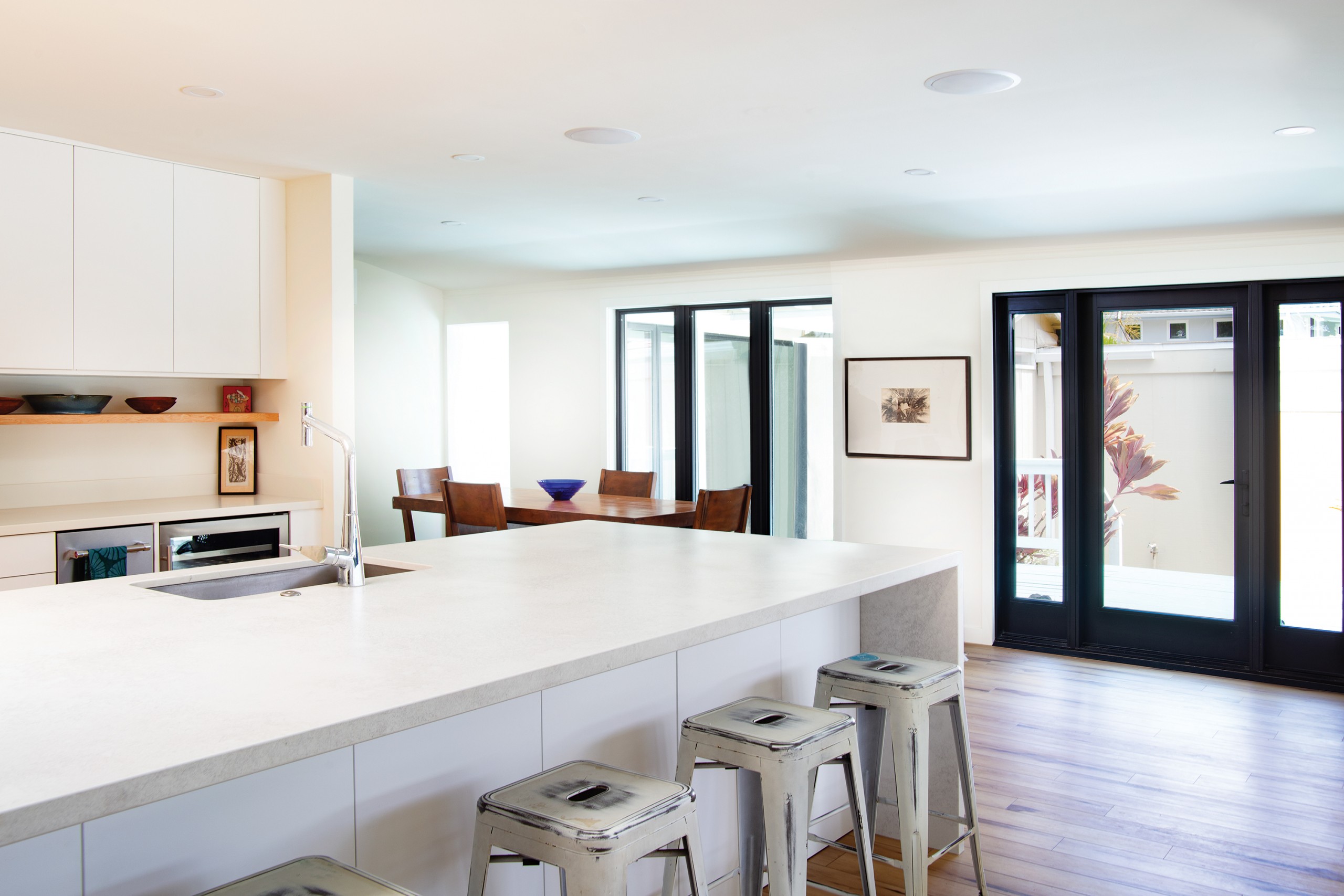 The large kitchen island has become a hub for the family, a place where folks can cook, clean and converse all in one room.

The overall goal with the Kailua home was to “improve flow and make the space more functional and inviting,” adds Fairall. Mokulua High Performance Builder lived up to its stellar reputation for providing quality green building services, shares the homeowner. Along with a brand-new open kitchen, the scope of work included replacing an exterior wall with 24-inch wide Fleetwood multipanel sliding doors to allow a seamless connection between indoor spaces and the backyard pool area.

The newly designed home is airy and bright, which is exactly what the family desired. “We wanted to achieve a clean, crisp and somewhat minimalist look,” says the homeowner. “It is difficult to keep a kitchen area clear of clutter at all times, particularly with kids; therefore, we wanted to make sure that the kitchen design and finishes were clean enough that they would not amplify the appearance of occasional clutter.” 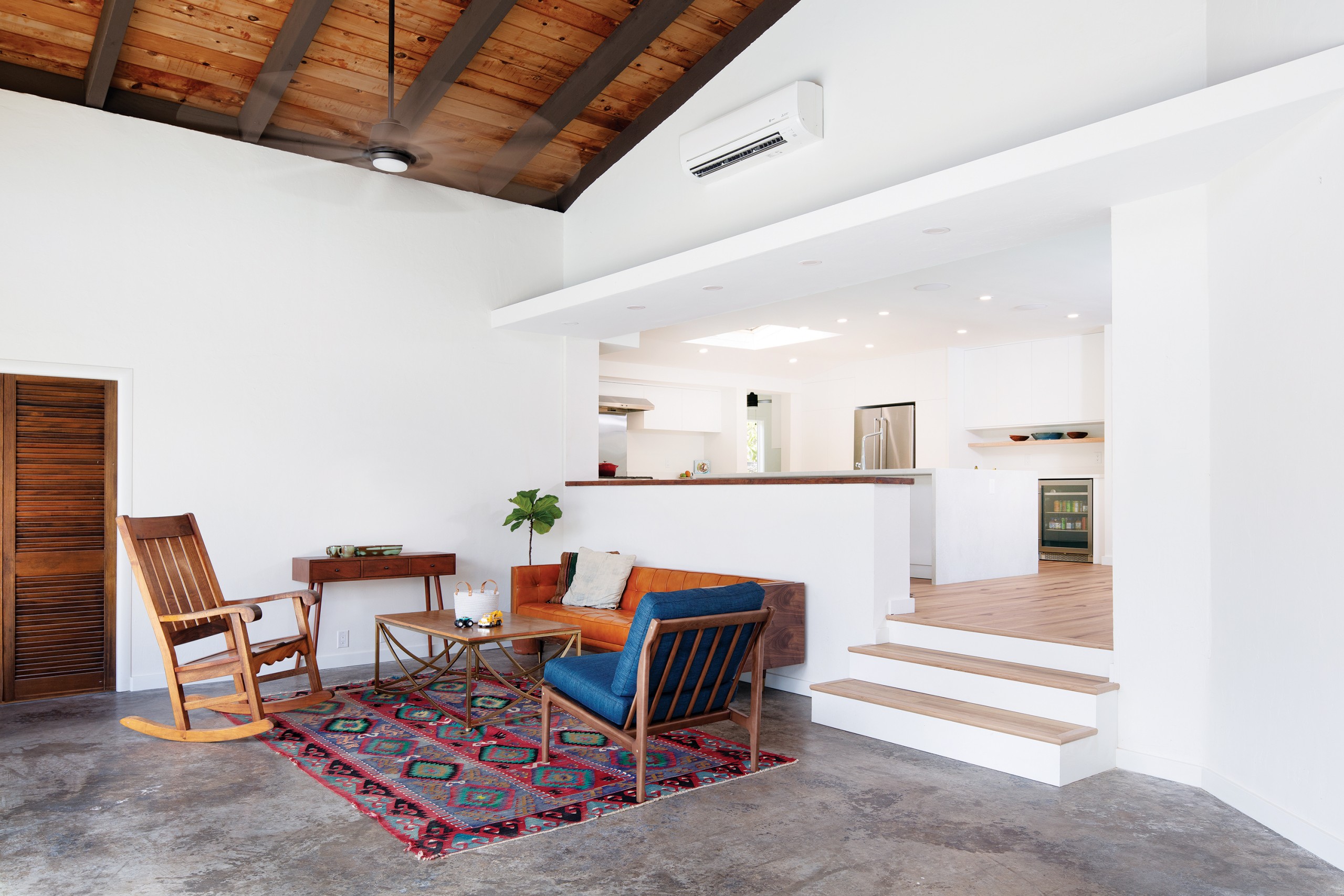 The kitchen flows naturally into the formal living room, where the family has a clear view of the backyard pool.

It was also important for the family to have a large kitchen island that could be used by everyone at the same time. “We wanted to ensure that the kitchen island area could be a space where people focusing on cooking or cleaning up after a meal could remain part of and participate in social gatherings,” adds the homeowner.

The white cabinets from Bellmont Cabinet Co. have no drawer pulls, making for a cleaner aesthetic. The kitchen island has Silestone counters; the rest of the room has Corian surfaces. “The color of these countertops is slightly off-white to add some depth to the color scheme in contrast to the white cabinets and walls,” says the homeowner. “We have a stainless-steel backsplash behind the stove to present an almost industrial feel for the Thermador range area.” 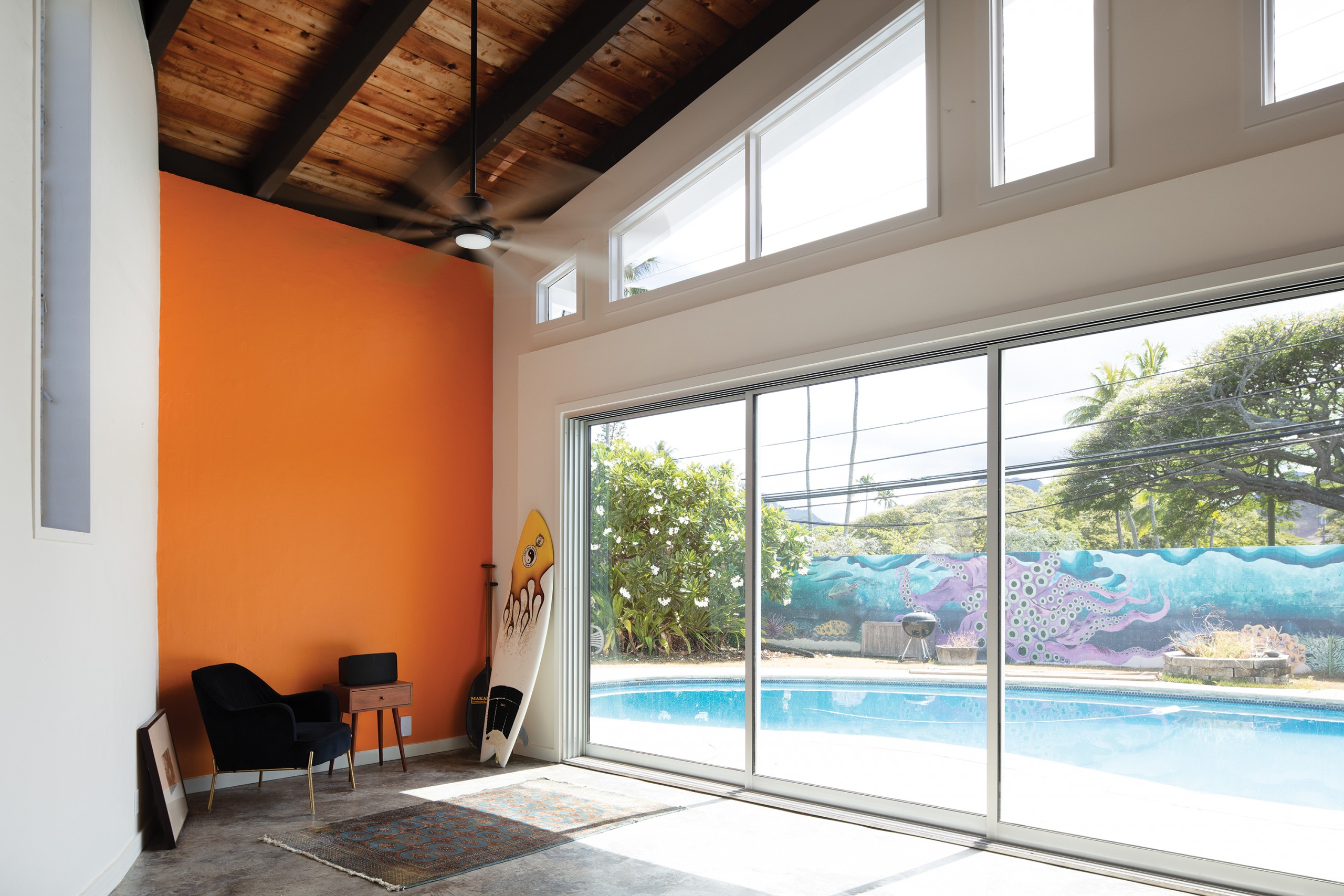 The six-burner stove, two Bosch ovens and two refrigerators — the second one is in the laundry room — make it easy to entertain guests. “The kitchen is top of the line, well thought out and great for family use,” says Fairall. “The open flow greatly improved the air circulation, and the home is naturally much cooler as well.”

Opening up the kitchen and dining room, which were previously separated by interior walls, allowed for more
natural light and connection. Beyond the kitchen is a new utility counter and built-in office area that adjoins the laundry room. Down a few steps, family members can enter the living area that opens up to the pool through the Fleetwood multipanel sliding doors.

“Our home is far more useful and livable than it used to be,” says the homeowner. “Opening and connecting the spaces has allowed us to feel more connected as we use different areas of the house.”