It’s not every day a leak from an upstairs bathroom results in a dream kitchen. That’s what happened to Kanoe Gibson, co-host of “HI Now.”

“We had no intentions of renovating our kitchen unless we won the lottery,” she says, laughing. “But we had a flood in our kitchen, so we were forced to do it.”

Gibson, who grew up in both Hawaii and Missouri, wanted to combine two distinct styles — coastal and farmhouse — in her kitchen. She enlisted the help of All Things New to transform her small, enclosed galley kitchen into something more open and modern.

“In our house, the hub for our family is the kitchen,” says Gibson, who shares the Kuapa Isle townhouse with her husband and two kids. “We’re always in here.”

She worked with Richie Breaux and Tiffany Pestana-Breaux of All Things New to come up with a design that incorporated her two styles while opening up the kitchen to create a more functional space for the family. 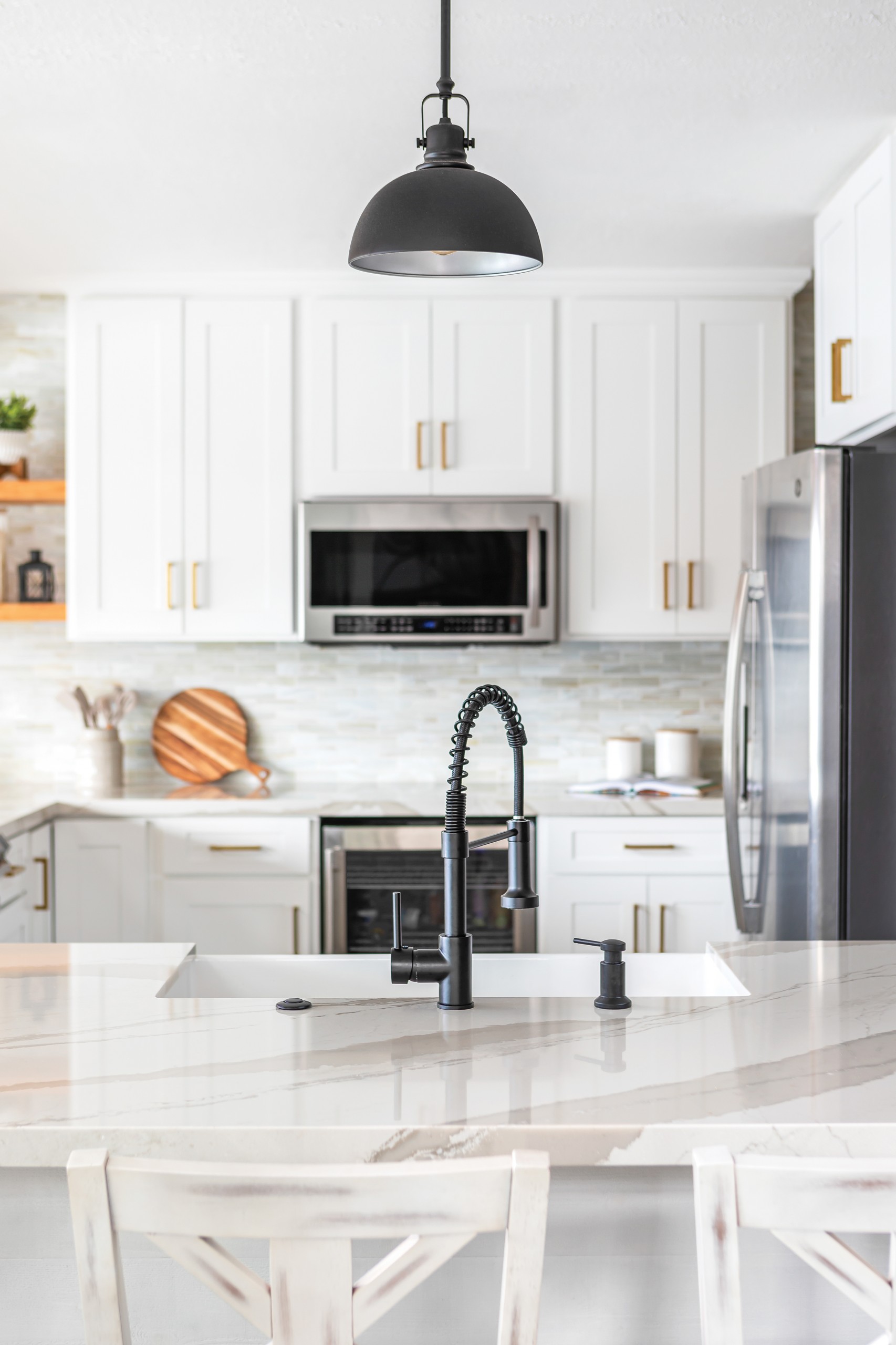 The design of the space draws upon coastal and farmhouse inspirations — from the Shaker-style cabinets with gold hardware to the beachy glass tile backsplash — reflecting Gibson’s upbringing in Hawaii and Missouri.

The once closed-off space was gutted and the small wall between the kitchen and the rest of the living area was removed. This allowed Breaux to expand the kitchen and give her more counter space and storage. And as a bonus, Gibson now has panoramic views of the marina.

Initially, Gibson wanted an island, but Breaux convinced her a peninsula would give her much more usable space — and he was right. “There’s so much more counter space, seating and storage now,” Gibson says.

An avid cook, Gibson had always dreamed of installing a gas range but wasn’t sure if it was possible. “A lot of homeowners think it’s not an option, but it is,” says Breaux, who partnered with Hawaii Gas on the project. “It’s all about where you strategize locating the propane tanks. It’s not as hard as homeowners think it is.”

A retractable downdraft range hood provides ventilation above the gas stove and allows Gibson to enjoy cooking with a view.

Gibson wanted to relocate the stove to the peninsula, so she could cook with a view of the marina. But that would require installing a hood, which would obstruct her view. Breaux, however, had an idea. He suggested a retractable downdraft range hood, which integrates the ventilation system directly into the cooking surface, eliminating the need for an overhead vent. And since it would be retractable, the hood rises near the range when it’s in use and retracts when it’s not.

Gibson replaced her appliances — except the refrigerator — with stainless steel Samsung appliances, including a new beverage fridge. “I never thought I would have one of those in my life,” she says.

Her kids draw and do their homework in the new kitchen. She and her husband set up laptops here and work. And Gibson’s favorite thing to do now is to come here early in the morning with a cup of coffee to read her Bible.

“What do I love about my kitchen? What don’t I love?” she says. “This is the place for us. If we’re not sleeping, we’re here.”

Where to Get It