One family’s story of turning a charming old house into their modern beach home.

Kate and Brian Beres knew this Kailua house was “the one” for their family of five. It instantly attracted them, but they didn’t buy the house for its looks.

The single-story house is in their dream neighborhood of Kaimalino, much closer to work and school, with quiet streets to ride bicycles, walk their dog and venture toward a beach access for snorkeling and swimming, in a small-town atmosphere reminiscent of days gone by.

The Beres’ saw past the house’s brown wood, single-wall tongue-and-groove construction typical of a 1950s-era Kailua house. The bathrooms were small and dated, with forced-corner showers and three-quarter tubs with pink and coral tile. The kitchen was closed off with a washer and dryer among its cooking appliances.

But the five-bedroom, three-bathroom home held so much potential for the Beres family. They could see themselves settling in and raising their children there. 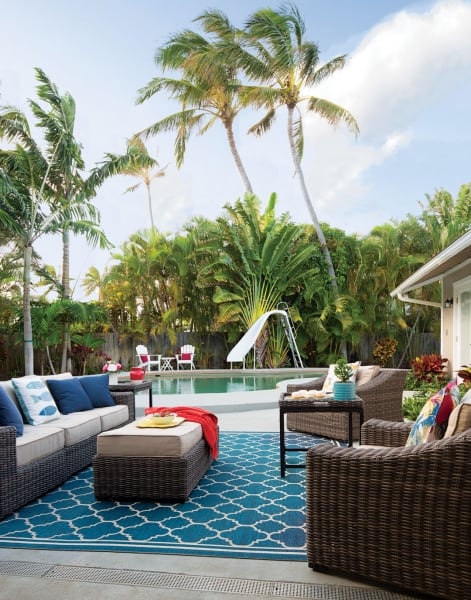 The Beres’ worked with Homeworks Construction Inc. to give the now 60-year-old house the modern updates it needed while retaining its charm.

“The bones of the house were workable and we could get functionality, practicality and many ‘wish list’ items without a full demo,” says Heather Hickox of Homeworks Construction.

The house already had a great flow, with the kitchen centrally located and a pool and outdoor living space connected to the family room by a sliding glass door. There were enough bedrooms for each of the three children to have their own, and a room they could use for an office and crafts. While there were elements of the house worth retaining, updates needed to be made.

Kate and Brian put a lot of thought into the kids’ rooms, knowing they’d grow up in this house. It was important to them for each of their children to have their own space.

“I’m big on nooks and little spaces they can make their own,” says Kate, who is a first-grade teacher. “I love having things that are visually pleasing, but also functional.”

Their youngest children’s rooms are side by side. Each was small, with low ceilings, so Homeworks created lofted ceilings in these rooms to make them feel larger and more comfortable. “We could continue the same pitch over the hallways and get extra living space in those small bedrooms,” Brian says. “It visually makes them seem much bigger because your eyes are drawn up toward the open space.”

Now these kids’ rooms have a lofted play area with built-in bookshelves, which eliminate the need for additional furniture below. The lofts connect to one another through a small door, big enough for a child. The kids can open the door to share their loft space with one another, or keep it closed to read a book by themselves.

The master suite is down the hall. Homeworks reconfigured the master bedroom, adding French doors that connect to the backyard pool area. A walk-in closet with windows was added to the suite. A four-foot custom barn door slides open from the bedroom to the spacious master bath. It has a walk-in shower, a soaking tub, his-and-hers sinks and a separate washroom.

Homeworks Construction rewired and replumbed the entire house. While the walls were open, it was the perfect opportunity to add high-speed Ethernet cables throughout the house, connecting to a central hub for the family’s media and devices to have high-speed connections in every room.

Most of the single-wall perimeter walls were retained, insulated and covered with dry wall. The new insulation in the walls and ceilings, coupled with windows and larger door openings, allows the house to stay much cooler than before.

“We are able to maintain a much more comfortable temperature, even without air conditioning,” Brian says.

White paint on the cedar ceilings in the living and family rooms on either side of the kitchen gives the interior a lighter, fresher feeling than the darker wood. A support post in the middle of the family room was removed and replaced with a steel support beam, wrapped in wood and painted white, offering the same supporting effect with an improved aesthetic that blends with the space.

Triple stacking doors that open to 16 feet wide replace the sliding glass door to open the family room up to the backyard, where the pool provides all-day entertainment in what is now a true extension of the family room.

“Originally they were going to keep the slider they had and opt for a window to the side, but it just didn’t feel right,” Hickox says. “It makes sense to invest a little more in the right option.”

The kitchen is now also connected to the family room. It had been dark and closed off to the rest of the house, tucked between the family and living rooms. The original cabinetry would stick, and wasn’t deep enough to fit a dinner plate.

The large kitchen island — Cambria quartz in Berwyn — offers enough seating for the family of five. It’s where the kids often do their homework and there’s plenty of room for meal prep. Built-in storage on both sides of the island offers enough space for kitchen essentials as well as games for the kids to pull out and play in the family room or outside. 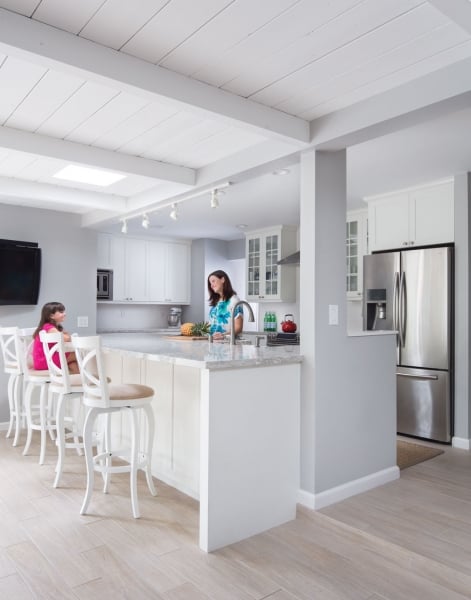 The new open-concept kitchen, family room and outdoor living area have become the most-used areas of the house for the Beres family and their guests. “I like the openness of the kitchen and the family room and how that opens up to the outside,” Brian says. “That’s my favorite space.”

The Beres family is settled into their new home, and are enjoying life in Kaimalino.

“Homeworks did such a good job; they really listened to us and they were awesome,” Kate says. “I couldn’t be happier.” 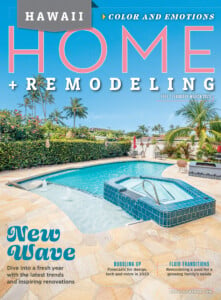