An oceanfront house is renovated slowly over the years to become a family’s dream home.

This oceanfront home’s renovation story all began with a couple of missing doors.

The new homeowners fell in love with the house, its view and location in Napili on Maui, and its colorful decorative details. The previous, original owners had enjoyed the indoor-outdoor lifestyle the house provides so much, they never slid the doors closed.

So when the new owners bought the house as is, they were surprised to learn they were unable to secure it. The six-panel sliding glass doors were missing two panels. 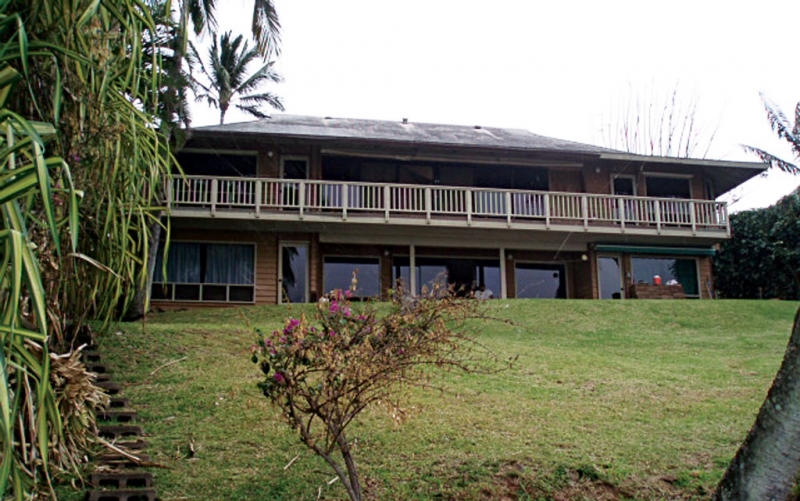 The original home and lanai area.

They called contractor David Stoops, who fixed the doors and, over the course of four years, remodeled the entire house. 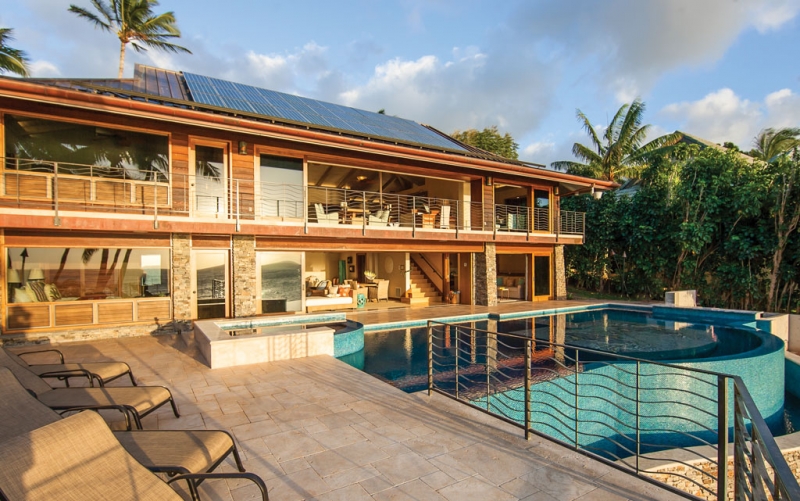 After: The new homeowners loved the house when they bought it and wanted to retain its indoor-outdoor character and large lanai. The footprint remains the same, but is updated with stronger, higher-end materials and a pool.

“They hired me to fix the door,” Stoops says. “It wasn’t supposed to be a big project.” But they made a short list of updates and the homeowners enjoyed the improvements they were making as the house began to feel more like home. The work grew from fixing security issues to making functional safety upgrades and design changes. As the projects grew larger, Stoops enlisted the help of architect Marc Taron of Arquitectura.

When Taron entered the picture, the homeowners wanted to renovate their master bath, which the team referred to as a bowling alley because of its dark aesthetic, oak floors and 15-foot-long, 4-foot-wide, slender shape. This narrow bathroom had an electrical panel outside the shower, creating a safety concern. 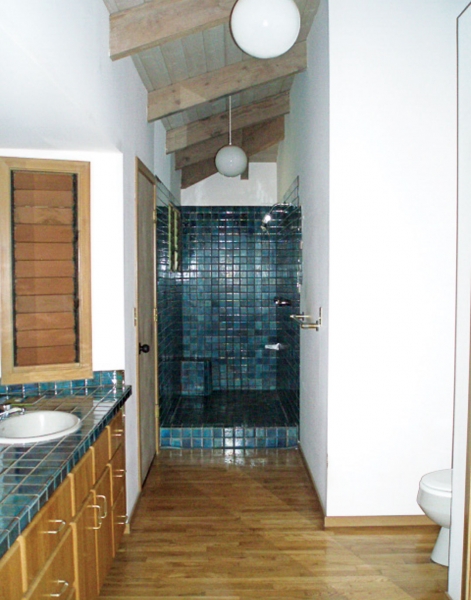 The team transformed the bathroom into an indoor-outdoor master bath with an outdoor shower and tub, with custom copper work to withstand the elements, made by Padilla Designs. They widened the interior of the bathroom, borrowing space from an adjacent bedroom, and relocated the electrical panel to a safer place, away from water. The master bath transformation was the turning point for additional major renovations. “They liked it so much, and one idea led to another and another, and we ended up going through the whole house,” Taron says. 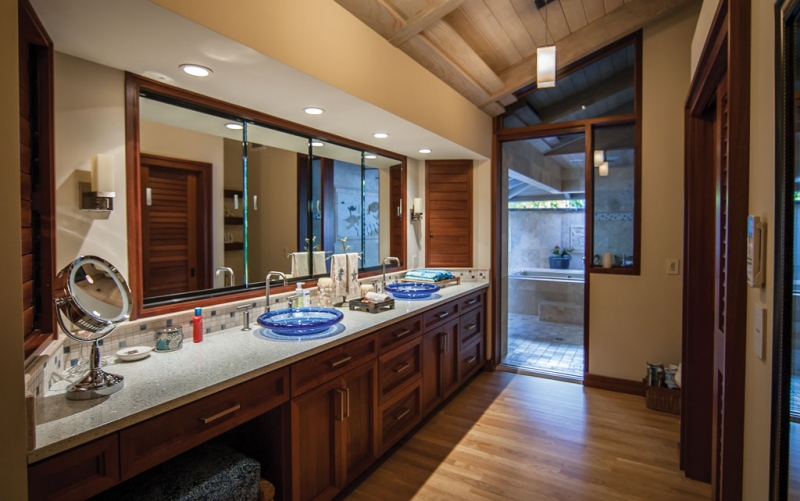 After: Architect Marc Taron redesigned what felt like a bowling alley into a luxurious indoor-outdoor master bath, complete with an outdoor shower and tub.

Originally, he explains, “I thought it was a tear-down because it looked like you could lean on the house and it would fall over. But they were pretty fixated on keeping the house.” 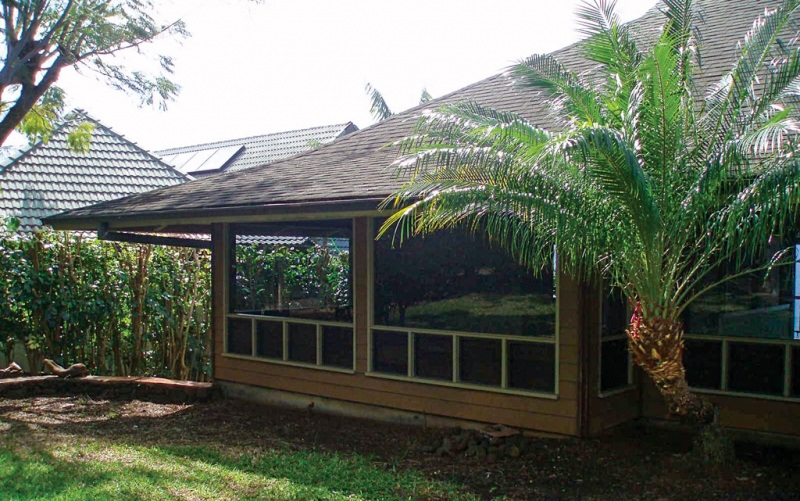 The original structure of the home.

They worked with a structural engineer to redesign the support systems of the house. “We used the strongest, best materials to put it back together, but we wanted to keep the same style,” Stoops says. They upgraded the siding of the house to have a stronger exterior of 1.5-inch-thick cedar and upgraded the windows to withstand hurricane-force winds, framed in sapele wood. 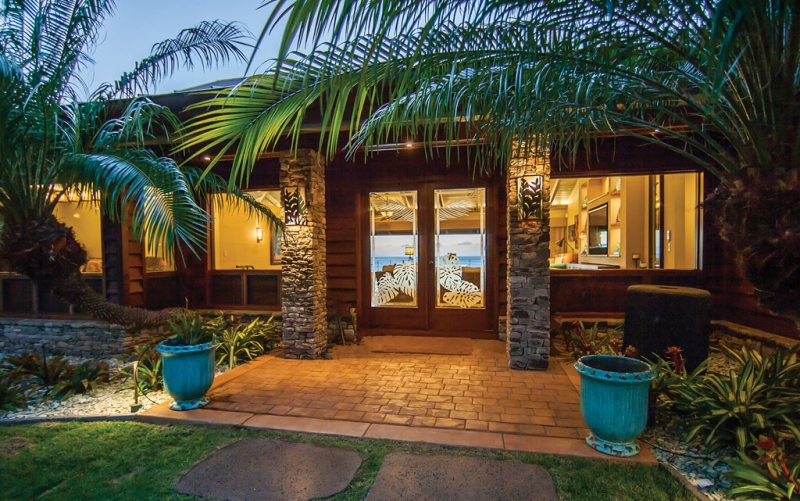 After: The team brought in a structural engineer and strengthened the structure of the house. They upgraded the siding to 1.5-inch-thick cedar, redid the roof and replaced the windows to withstand hurricane-force winds.

There were a lot of design details the homeowners loved about the house when they bought it, including the kitchen’s teal-tiled countertops. The kitchen needed to be updated, but the homeowners wanted to keep the countertops, so the team removed and saved all the tiles to reinstall them in the renovated kitchen. It now has stainless-steel appliances, two bay windows with sapele wood frames, sapele pantry doors, and cabinets that Stoops refinished on site. The kitchen ceiling is original, with cove lighting added between each rafter. “For cove lighting you usually need a continuous cove that wraps around the room,” Taron says. “This ceiling has a tongue-and-groove ceiling deck with exposed roof rafters, so we put cove lighting in between each rafter with uplighting in between.” 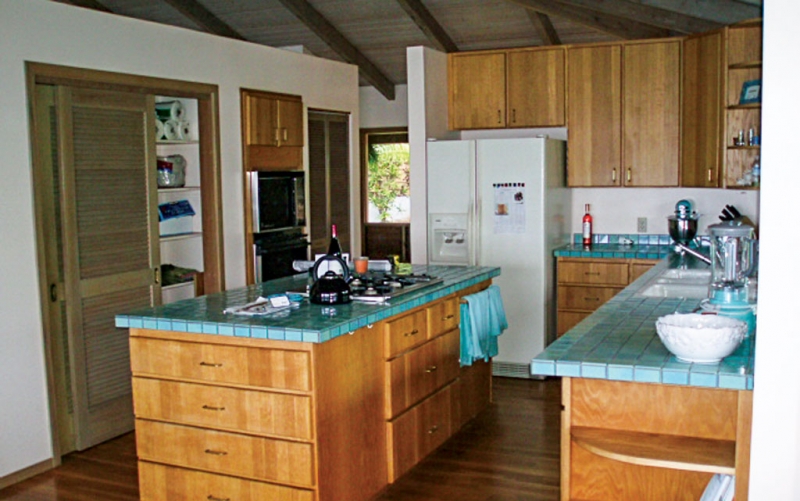 The homeowners worked with an interior designer to bring color and touches of Hawaiiana into the home. 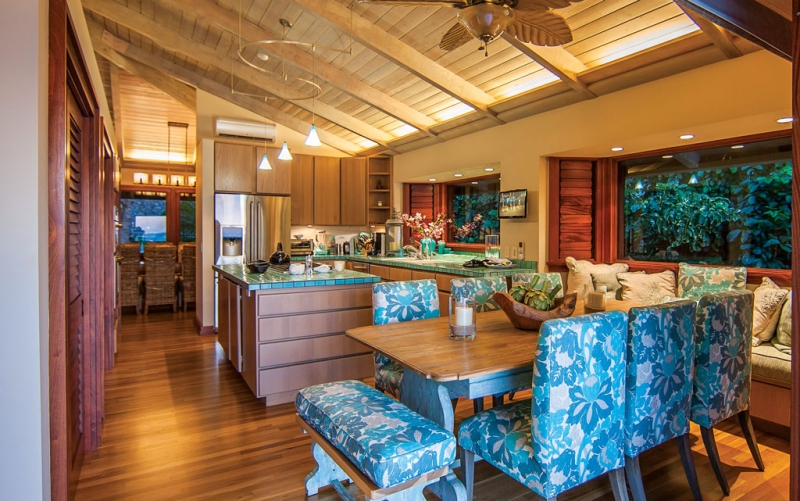 After: The renovated kitchen retains its teal-colored tiles, while the rest of it is updated with new appliances, sapele pantry doors and bay window frames, refinished cabinets and colorful furnishings to complement the countertops.

Outside, a pool built by Pono Pools was added to the landscape. The pool is made of blue granite in addition to tile, a choice that makes the water appear as refreshing as the ocean on the other side of the lawn. A spa flows into the pool on one side, while built-in stools on the opposite side of the pool face the barbecue. The family and their guests don’t need to get out of the water to enjoy a meal fresh off the grill in a unique dining experience. 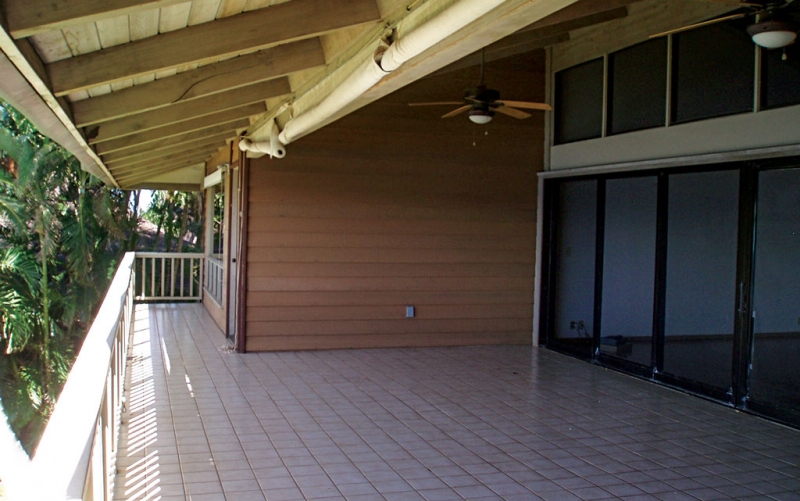 The pool reaches a depth of 12 feet, with the granite bridge covered by a few inches of water for tiptoeing across. Custom railings by Padilla Designs line the lanai and sections of the pool. 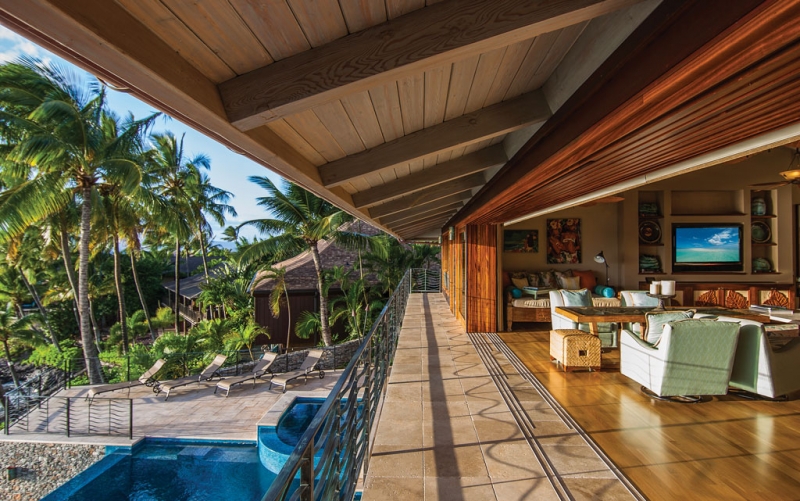 After: The renovated kitchen retains its teal-colored tiles, while the rest of it is updated with new appliances, sapele pantry doors and bay window frames, refinished cabinets and colorful furnishings to complement the countertops.

After years of renovations, the house became a family home to enjoy together. The family stays in touch with Stoops, who maintains the house.

“We keep it in brand-new shape,” he says.

Check out these additional photos: 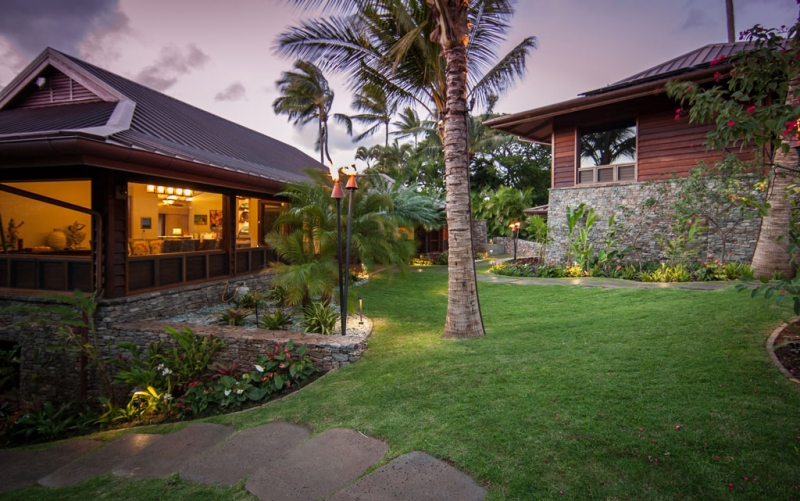 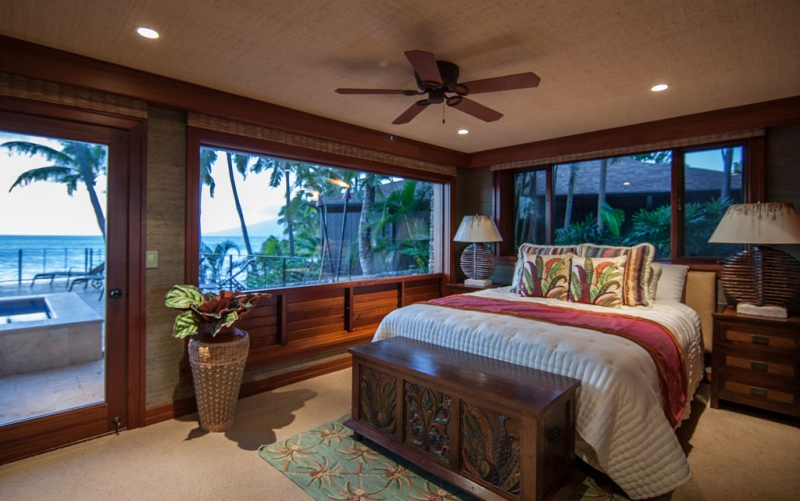 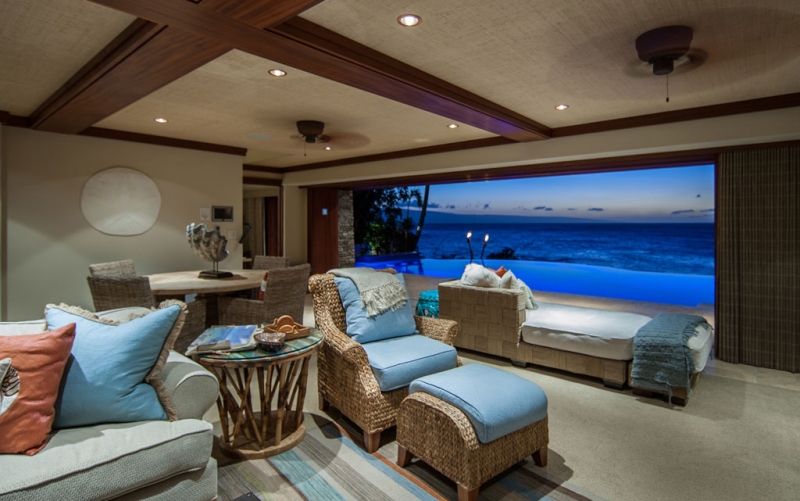 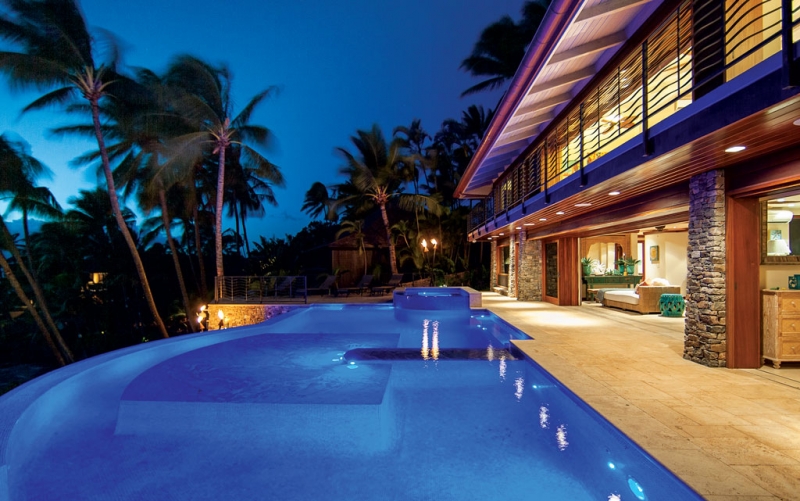