Pacific Heights home remodel is designed around natural ventilation and a stunning view.

This three-story house in Pacific Heights has not always had the magnificent views of Pauoa Valley, Punchbowl, the downtown skyline and the Pacific Ocean that it has today.

The original homeowner, an architect, designed the house quite well in the mid-1970s, but over the next several decades, subsequent homeowners made renovations and additions — some unfinished — that left the house with doors to nowhere and walls without windows.

Husband-and-wife team Matt and Rhonda Goyke of Green Sand Architecture + Sustainability refer to the house as a mini Winchester house, as it had been subjected to a series of poorly planned additions and renovations.

“It made for very chopped up, compartmentalized spaces on the interior,” says Matt. “It was also in need of substantial repair; exterior siding was falling off in certain locations, stairways on the exterior had long since fallen off and been removed – that’s why doors opened to nowhere.”

Carole and Karl Stahlkopf were living in a house down the hill, on the other side of the backyard, before buying their neighbor’s house.

“We came up and we looked at the house, but I think, more importantly, we looked at what the property could become. It has some very nice, unique features to it,” says Karl.

The Stahlkopfs hired Green Sand Architecture + Sustainability to do an extensive remodel of the house, making sensible additions and renovations to suit their lifestyle and appreciation for nature – and a great view.

With work to be done by Hawaii Renovators, Green Sand Architecture + Sustainability began the project with a thorough site analysis, including interviewing the most recent homeowner about everything from the direction of the wind, rain and sun at different times of day and year to the history of the house and its small renovations and mismatched additions. Rhonda Goyke specializes in sustainability while Matt Goyke specializes in design.

The Goykes were already familiar with the wind patterns in the neighborhood, having previously lived in the area, but each property is unique, with abutting structures and landscaping. The Goykes and Stahlkopfs actually met walking their dogs – the Goykes with their golden retrievers and the Stahlkopfs with their Sussex spaniels – through the streets of Pauoa Valley.

“We try to listen to the site and respond objectively to the conditions of every site, and kind of let that speak to us and guide us on where certain things should be,” says Matt.

The Goykes designed the house to have a number of windows in the northeast corner of every floor that can be left open, with bigger windows and pocket-door openings on the leeward side of the house to help pull the air through. The other walls, facing neighboring houses, have fewer or smaller windows to create privacy and noise control. 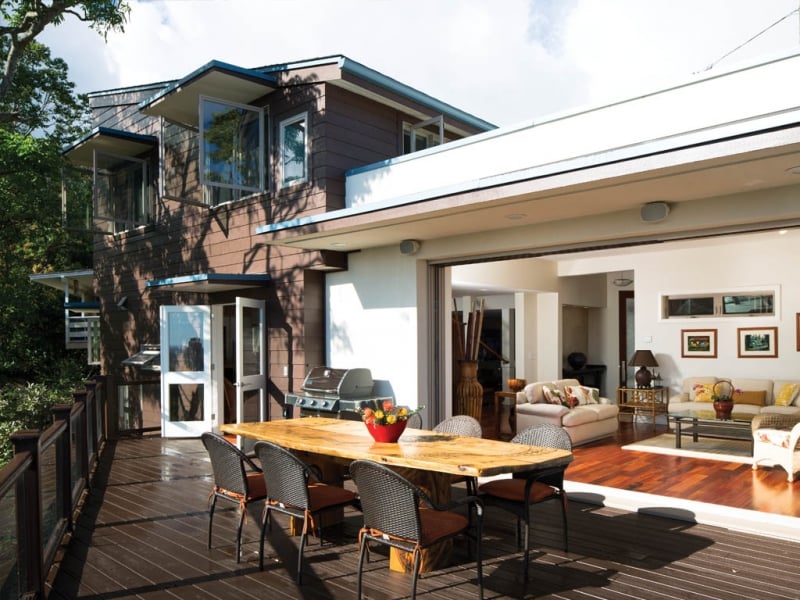 “They’re very tuned into the environment, to energy flows, to how to keep your house absolutely cool and clean while using as little air conditioning as possible,” says Karl.

The design provides the Stahlkopfs with breathtaking views from their living room and master bedroom, with air flowing naturally through the house to keep it cool.

When the pocket doors are open, the living room extends into an expansive wraparound lanai from two sides of the room, offering a picturesque view and an indoor-outdoor atmosphere. The Stahlkopfs and their visitors are greeted with this view when they enter the house, as the main entrance is on the second floor of the three-story house. 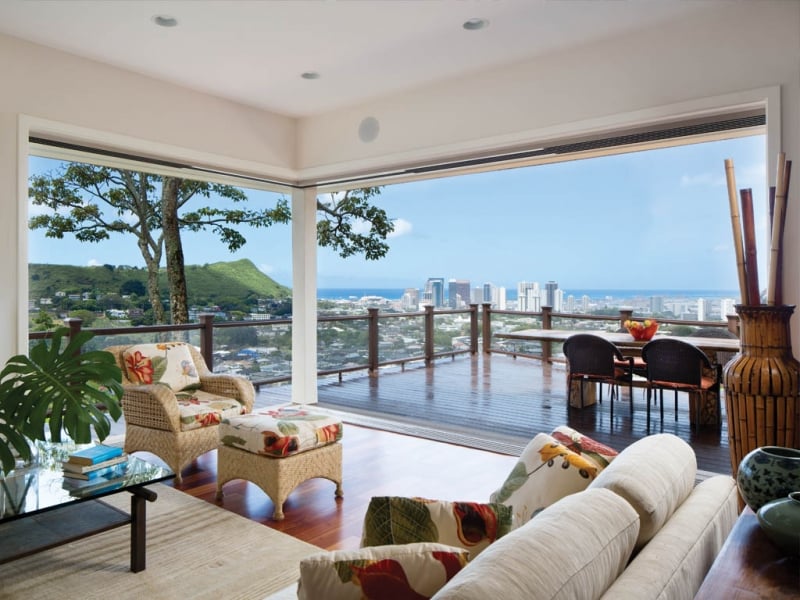 Downstairs, doors on two sides of the master bedroom open to the same view, allowing the Stahlkopfs to fall asleep to the flickering city lights, like stars in the night sky.

“I’ll never forget going to bed the first night and looking out at all the lights,” Carole says. “That view is dynamite.”

An open-tread stairway interconnects the three floors of the house and draws cool air from the bottom floor of the house up and through the second floor, letting warm air out through the third floor. The stairway is also aesthetically pleasing, with its open concept. 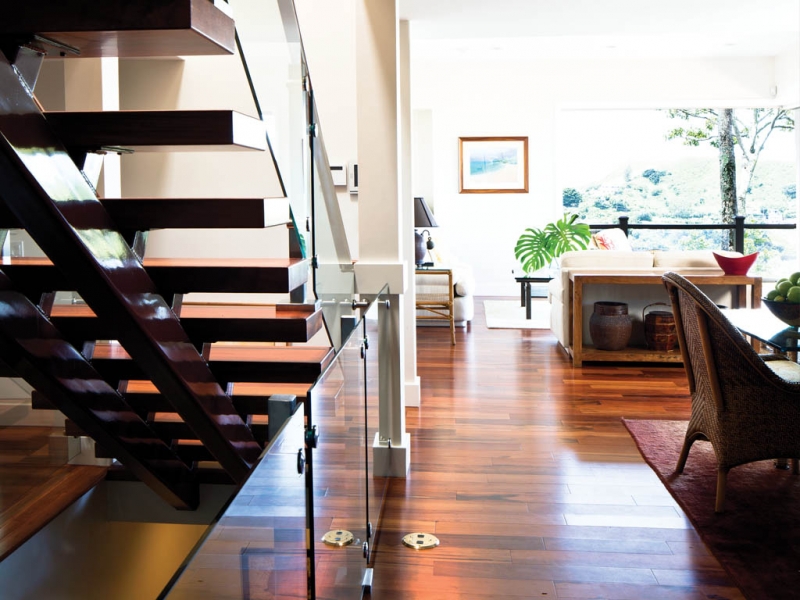 “It uses the natural temperature differential and negative and positive pressure created by the wind blowing through the house to help pull air up the stairway and out the top,” Matt says.

Today, the Stahlkopfs enjoy their open, cool house and its views, especially from the middle level of the house, where they spend a lot of their time. Karl says it makes the whole house complete. 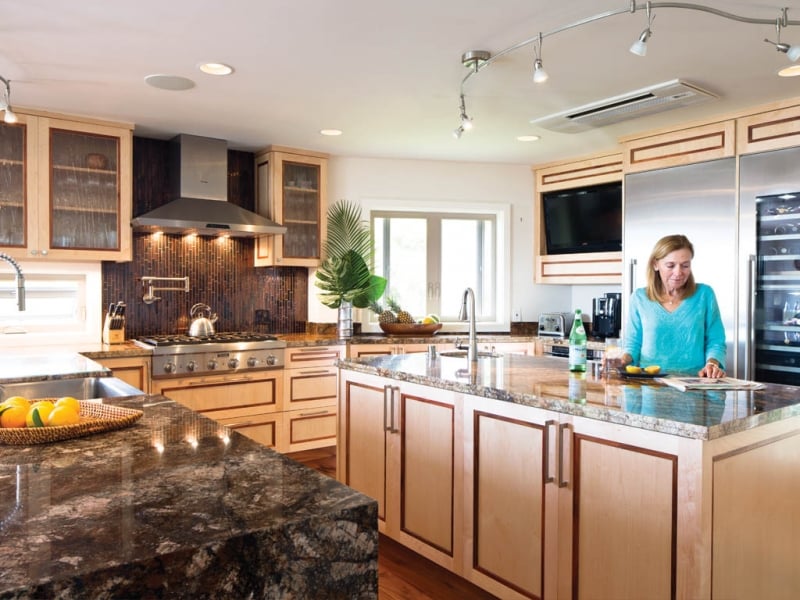 “It’s exactly what we wanted and takes advantage of the things Hawaii has to offer in terms of a beautiful view, outdoor living, and the really nice things like being able to pick up the trades and building intelligently on your property,” he says. 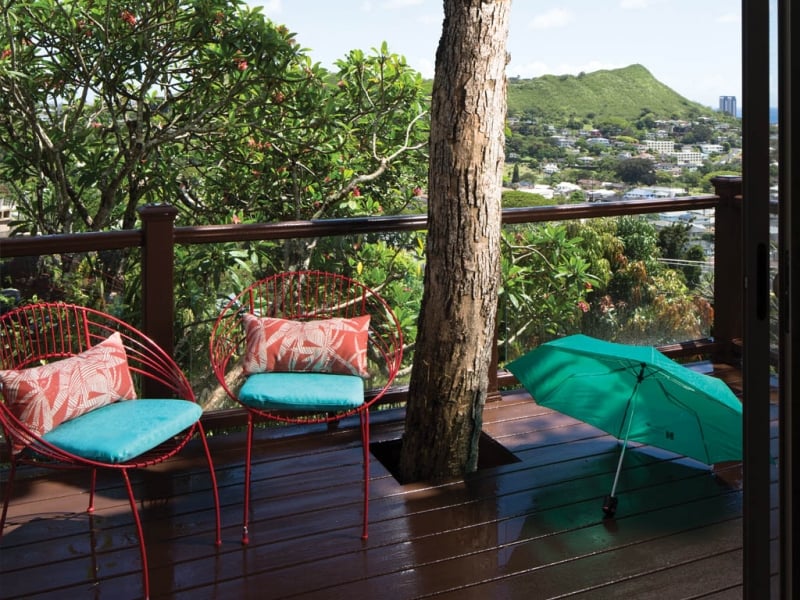