The Evolution of Moiliili as an Urban Honolulu Town Center

The work of local artists, designers and craftspeople raises the Hauoli Lofts.

Circumscribed by natural and man-made thoroughfares, the neighborhood of McCully-Moiliili has evolved from an agricultural community into an urban town center in the heart of Honolulu.

New to the scene is the Hauoli Lofts, a boutique residential development envisioned by local designers who are defining a new approach to urban living.

Wei Fang, developer for the nine-unit project, has worked for museums and auction houses, granting her an unusual distinction as a design-oriented developer. “My career has been inspired by community-driven design and community place-making,” says Fang.

The concept and design for the Lofts was aimed at introducing new ways of thinking about how to live simply in an urban environment. “‘Different’ and ‘new’ can be challenging when it comes to construction,” says Fang. “But along the way we found people and teams to advocate for and support the design. We have to keep pushing for innovation and diversity in Honolulu’s built environment to meet challenges the city faces today.”

Within the nucleus of Kakaako’s rising art scene, Fang assembled a team of up-and-coming architects and designers to create a one-of-a-kind housing development in metro Honolulu.

“The Lofts were an experiment to provide good design at a reasonable price point. Everything about the project was unconventional from the get-go, including the funky neighborhood and precast concrete.”

When considering a location for the Lofts, the team gravitated toward the oft-overlooked neighborhood of Moiliili. “If you think about it, Moiliili is Honolulu’s original walkable neighborhood,” says Fang. “All the amenities are in place, and the neighborhood was the appropriate scale and speed for the residential community we envisioned.” The team eventually settled on a 10,000 square-foot lot one block from King Street.

Architects Janice Li and Bundit Kanisthakhon, principals of Tadpole Studio, worked closely with Grace Pacific, brokers and property managers to finalize the design and unit blueprints for the low-rise structure. The size of the building was constrained by city parking requirements—Honolulu requires a minimum number of stalls per residence—so the architects sought to create generous spaces within the lot’s small footprint. “We knew we could raise the ceiling heights to provide residents with nice, big volume and light and airy spaces,” says Fang. Thus, the designers created living areas with 19-foot ceilings, massive windows and an open floor plan. “The windows face mauka, so residents can watch the rain roll in over Manoa Valley.”

Groundbreaking took place in 2015, and over the course of the next few years the construction team assembled huge slabs of precast concrete into a three-story building, replete with parking structure and roof deck. The engineers and architects included forward-thinking features, including PV panels, native landscaping and electric vehicle conduits in the parking stalls.

The placement of the building on the lot allows the structure to catch cross breezes using Breezway louvered windows and Haiku Fans’ smart ceiling fans. The modern, louvered windows with six-inch panes have ios Surround Frames, keeping the residences cool and well-ventilated throughout the day.

Over the course of construction, the exterior sun-screening system changed the most. Today, the building is outfitted with one-of-a-kind concrete “fins” of precast concrete that shade the exterior and keep the industrial look consistent. 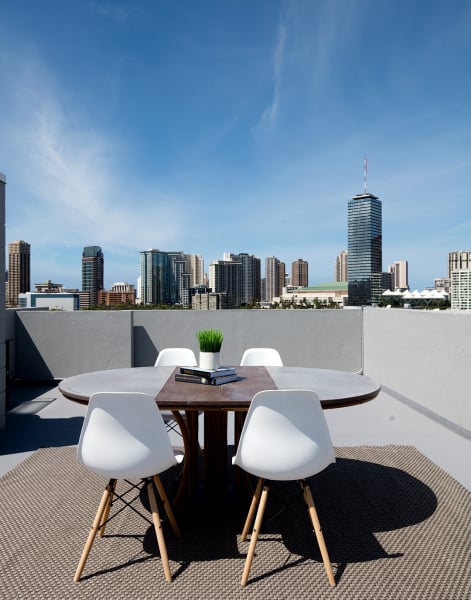 Within the Lofts, the architects pushed for the idea that less is more. “They encouraged our team to keep everything understated and underdesigned,” says Fang. “Once people move in they can bring their taste to it. That’s the Tadpole Studio ethos.” The floors in each unit are a simple, smooth concrete buffed to a soft shine. Locally made cabinetry by Sunworks Construction and custom handrails and interior stairs by Heavy Metal Hawaii add bespoke touches to each unit.

New homeowners have moved into the residences, helping to define Hauoli Lofts’ fresh community. Says new resident Keola Rapozo, designer and owner of Fitted Hawaii: “The technique and ideology organizing the space has given us a blank canvas to work with. I know the designers’ sensibilities, and Honolulu needed this type of perspective. When you turn onto Hauoli Street and pass by the Lofts, it feels like it was always supposed to be there.”

5 Ways to Make Rental Properties Work for You