Ask the homeowners, architect and project manager behind the Musubi House about this unique project, and you’ll hear many amazing anecdotes on how it came to be. The stunning Paauilo residence is a marvel — and one that illustrates the beauty and innovation possible with sustainable living. It’s also an homage to Hawaii’s community spirit.

“We all have a deep respect and love for what’s real about Hawaii: Aloha, ohana, loving the land, the ocean, the people,” says architect Craig Steely. “We did our best to create a home that stands as much for inspiring design as environmental responsibility and self-sufficiency.”

The Musubi House — nicknamed by contractors for the resemblance of its floor plan to the sometimes triangular Japanese rice snack — was dreamed up by homeowners Guy and Stacy Brand. “We wanted less not more, getting rid of anything we did not need for a minimal existence,” shares Guy Brand. “Our goal was to have a house that blurred the lines between indoor and outdoor living. You hear it frequently, but rarely is it achieved.” 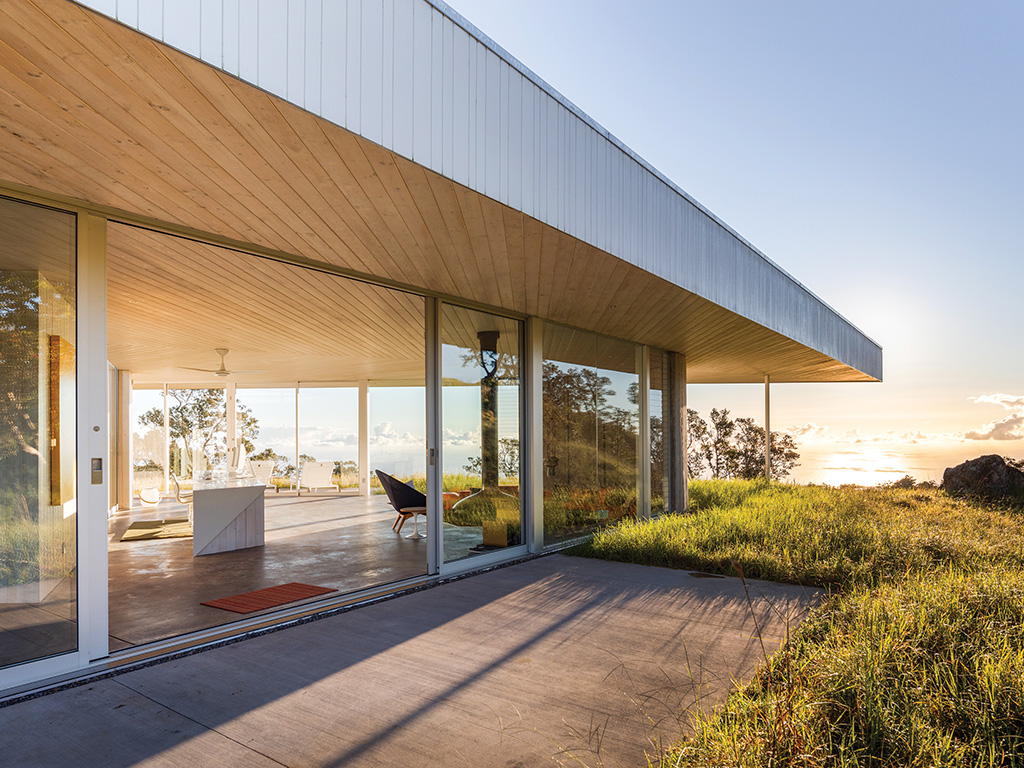 Panoramic views of the ocean and mountains are breathtaking from the home’s location in rural Paauilo.

Brand grew up in Kona and is a Konawaena High School alumnus. Stacy Brand is originally from Laramie, Wyoming, with family on Oahu. After graduating from the University of Hawaii at Manoa in 1992, she traveled to the mainland for work opportunities, then to Hawaii Island, which she “fell in love with immediately.” For the homeowners, creating the Musubi House was a way to reconnect with their Island roots.

“I loved the Big Island growing up,” notes Guy Brand. “It’s been my life goal to return home and live on the Hamakua Coast.”

After initially considering architects in Australia, the homeowners eventually opted to work with Craig Steely’s firm. Steely has bases in California and Hawaii; the Brands discovered that Steely lived part-time on Hawaii Island and had already designed several homes there. 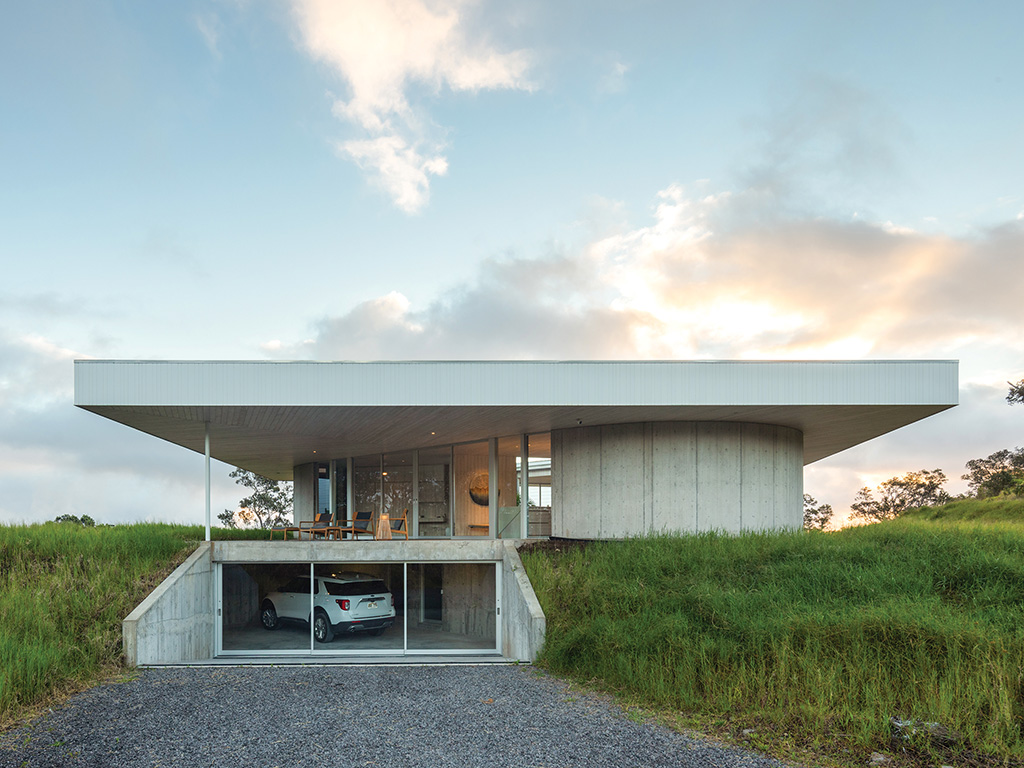 The home incorporates forward-thinking architecture while ensuring minimal impact to the surrounding environment.

Planning between the Brands and Steely began in 2012. Guy Brand describes their partnership as “kind of existential,” with music, art, food and the greater meaning of life as muses inspiring their new home. “We talked about spaces we like, feelings we want to get from the house, our dreams, living on the land,” he notes.

Construction began in 2015 on the rural property that spans 100 acres of grassland and ohia forest along the northeast slope of Mauna Kea. The house is nestled among valleys with seasonal creeks and stretches of Wainaku grass — as winds sweep over, the house appears as if it’s floating in a sea of rolling grass. 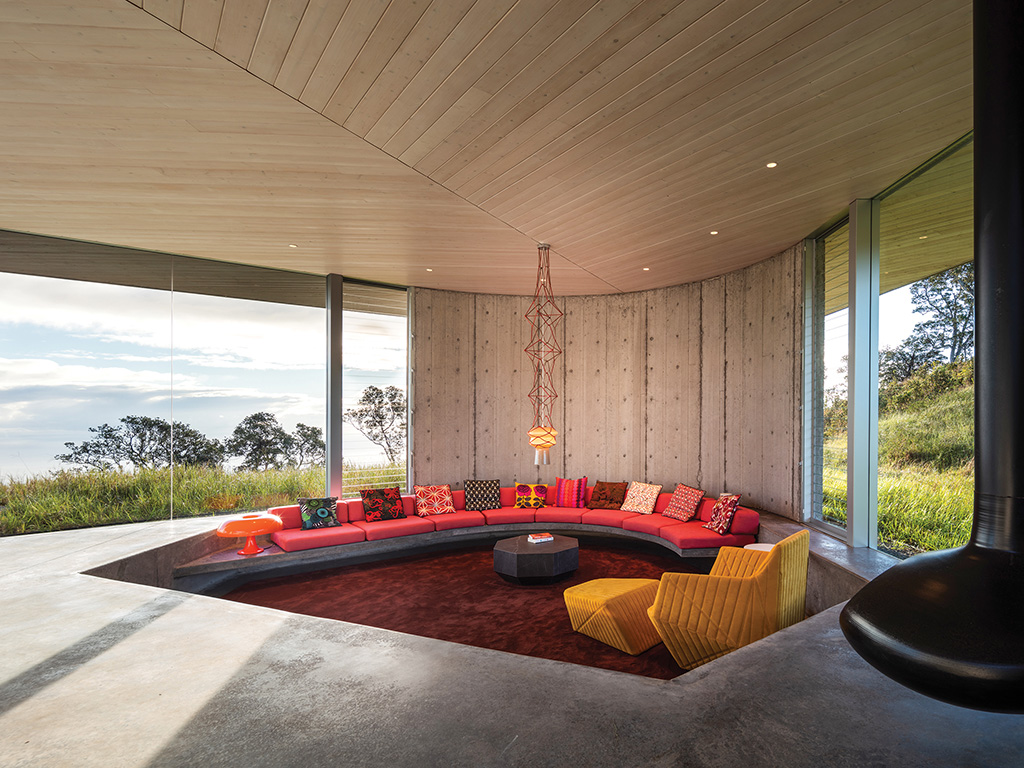 In the Musubi House, the living/working area is one of three distinct “zones.” This space exemplifies the homeowners’ goal to blur the lines between indoor and outdoor living.

The Musubi House diagram is relatively simple: An outdoor triangle within an indoor triangle that supports a diamond-shaped roof. Three short, curved concrete walls comprise the indoor triangle and delineate three distinct zones: a bedroom and bath zone, a kitchen and a living/working zone.

The atrium in the center of the home serves as an outdoor room between these zones. Features of the atrium include flooring made from cut pahoehoe lava and doors on two sides of the space that retract into the walls seamlessly. Hapuu ferns and Rhapis palms were added for privacy to the outdoor shower and bedrooms.

“The clients’ willingness to prioritize permeability over privacy gave us the freedom to create a plan without doors or hard boundaries,” explains Steely. 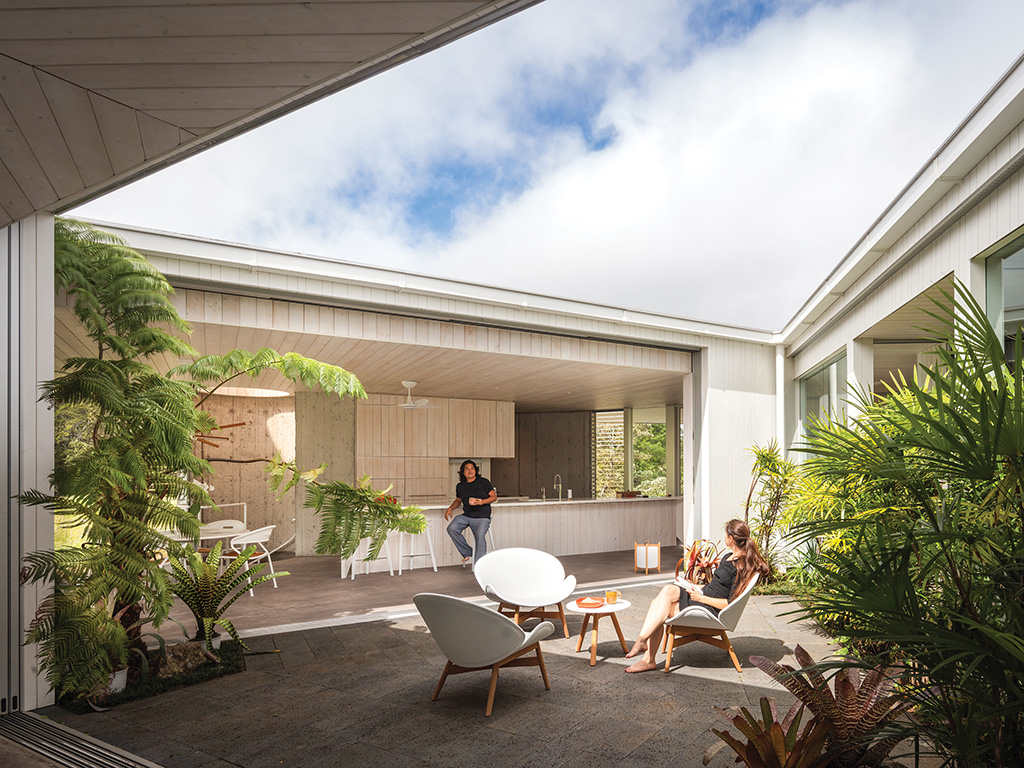 An atrium at the center of the home is one of the homeowners’ favorite features, with flooring made from cut pahoehoe lava and retractable doors.

What makes the Musubi House even more impressive is that it is a totally self-sufficient, net-zero single-family home. It operates off-grid, relying on energy from an advanced photovoltaic panel and battery storage system. A catchment system is used to collect rainwater, which is then filtered and stored in cisterns within the structure. Cooling and ventilation is natural by design, with rooms thoughtfully placed for optimal orientation to the sun and cross-ventilation throughout the day.

“It’s such an amazing feeling to be completely off the grid and not rely on any utilities,” explains Guy Brand. “Musubi uses 2% of the power that our Venice, California, home uses.” 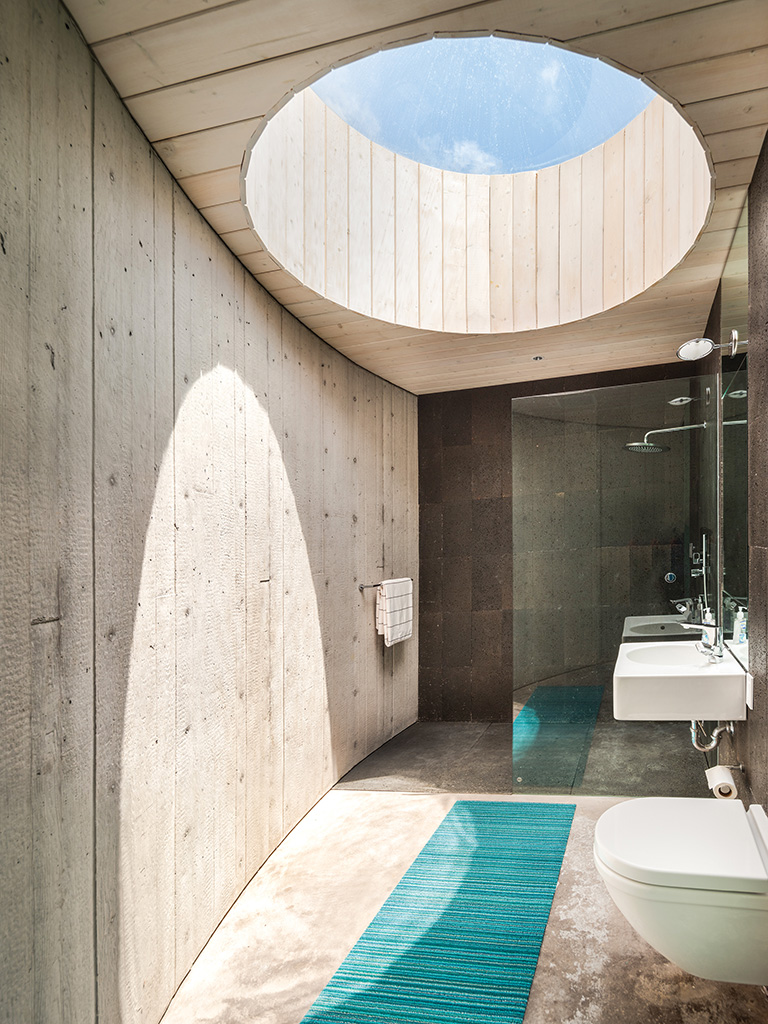 With the homeowners opting for permeability over privacy, the Musubi House bathroom is uniquely designed for the elements.

According to Scott Dale, who served as project manager for Kauhale Kilohana, the general contractor of the project, the site’s remote location and the weather were the biggest challenges with the Musubi House.

“When we met at the site here in Hawaii is when the logistical complexities of building this ‘simple’ designed home first hit me in the gut,” says Dale. “There are many wooden bridges with reduced weight limits on any given route to the site. Materials were sometimes delivered to me on the side of Highway 19, where we would make several trips with a smaller flatbed.” 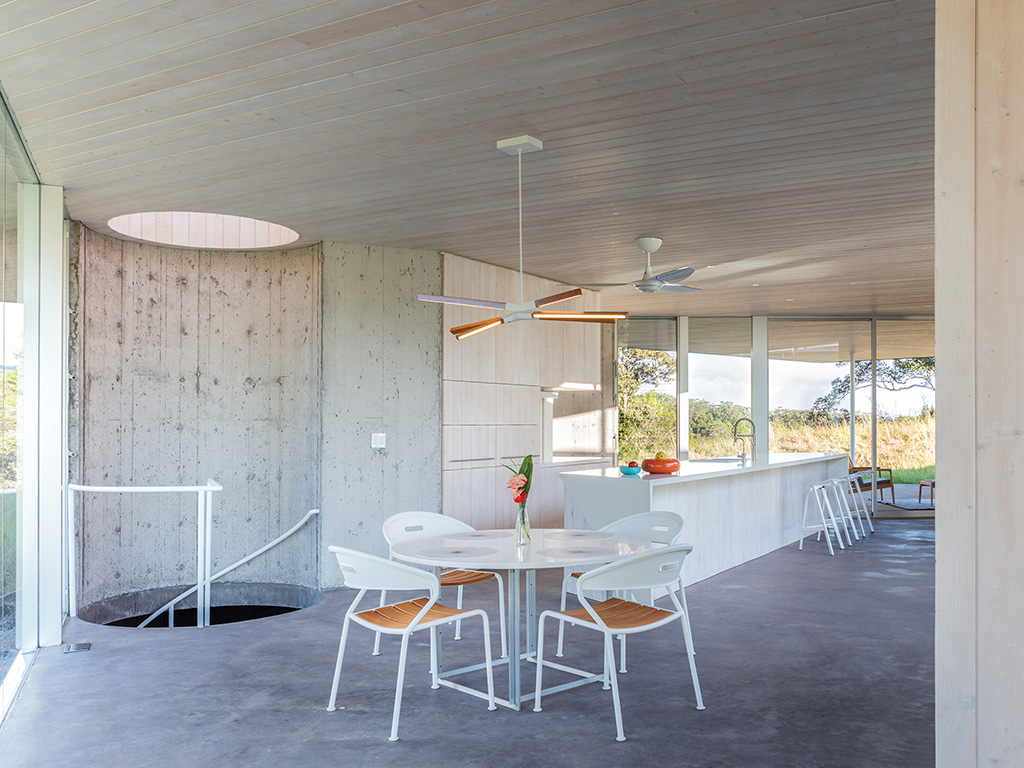 The Musubi House kitchen is airy and inviting, with thoughtful placement for optimal cooling and ventilation throughout the day.

Dale also notes that the Musubi House “was the wettest project I have ever worked on.” Roads to the site at times were impassable due to rain. One morning, trees and utility poles were knocked down by an unseasonable burst of wind and neighbors and Musubi House crews worked together to clear the path. “The good news is, the weather has never been the same since we finished the home,” he says.

The Brands say they’re grateful for all the work that went into the Musubi House, describing it as a labor of love and aloha that inspires them each day. “Being at the Musubi House really gives you a greater respect for the Islands,” Guy says. “It’s like Hawaii was here long before us, and will be here long after we are gone. We are only guests to this beautiful place.”

The Musubi House was honored as the Hawaii Home + Remodeling Editor’s Choice winner at the 2022 AIA Honolulu Awards gala on Aug. 26, 2022.