Two years ago, on friday the 13th, a flash flood swept across Kalanianaole Highway and severely damaged this East Oahu residence. The homeowners salvaged what they could from the first floor’s common areas, but 10 inches of water and sludge had damaged their koa floors beyond repair. The flood and necessary repairs catalyzed a complete renovation of the kitchen, living room, bathrooms and dining areas, transforming the waterfront home into a contemporary oasis clad in steel, glass and stone.

The homeowners partnered with J.R. Moorhead, general contractor and founder of Moorhead & Company Inc., to spearhead their renovation and repairs. Interior designer Jeffrey Hatterman of Accent Design & Renovations was brought on to advise on material selection and furniture to accent the new space. Working closely with the couple to understand their design goals and needs, Moorhead prepared a project plan that reworked the first floor’s interior space to achieve a contemporary look using both modern and traditional materials. 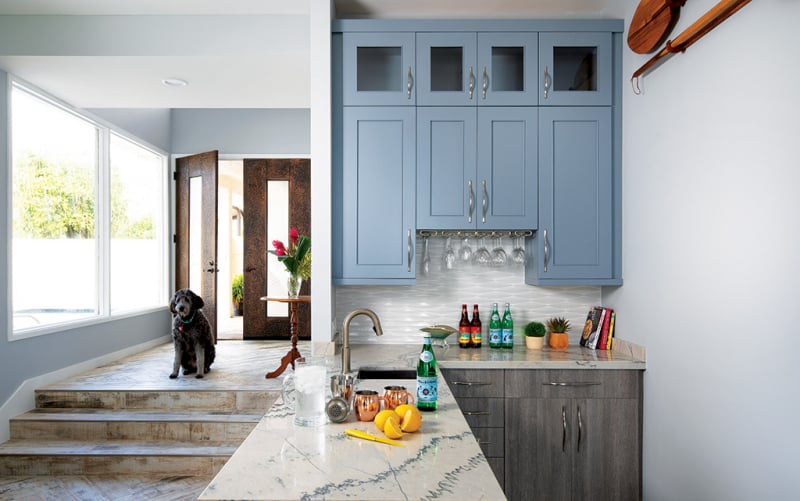 Before the flood, the home’s interior was bedecked in natural hardwoods. The sunken great room was accented with a koa wet bar and built-in koa cabinets on either side of the fireplace’s plaster mantel. Both the great room and dining room had views of the beach, while the kitchen and living room, which faced the back of the house, were closed off by an interior wall. The stairway leading to the second floor was built of wood and plaster and the spandrel below the staircase was embellished with an indoor rock garden.

On the night of the flood, the homeowner was downstairs with her poodle, Truffles, when the dog began to act nervous. She watched as water streamed into her house from both the front door and the garage door. “We panicked,” says the homeowner, who struggled with her husband to salvage what furniture she could from the rising water. “We opened the lanai doors so the water could flow through and out of the house, but there really wasn’t much else we could do until the flood subsided.” At the end of the night, at least 10 inches of water had flowed through their home’s first floor, leaving behind a trail of sludge and debris. “We never expected a flash flood to come in from the highway,” says the homeowner, noting the thunder, stalled cars and gushing streams that defined the night.

Hatterman advised on cabinet selection, and the couple opted for a custom cabinet package from Design Craft cabinetry. The kitchen cabinets utilize two different door styles and colors. The wall cabinets were customized into a split two-door cabinet with glass inserts on the upper doors allowing for a lighted display area. Moorhead also included a custom “lift-n-stay” appliance garage cabinet next to the second sink to hide the espresso machine, otherwise known as the “Coffee Bar.” All the base cabinets are equipped with custom features such as magic corners in the blind corner cabinets, rollout trays, spice rack pullouts, waste and recycle bins and oversized drawers for larger pots and pans. Included in this kitchen is a full size pullout pantry beside the refrigerator for additional storage.

Throughout the downstairs living spaces, Moorhead and team removed old air conditioning ducts from the ceiling and added recessed lighting and slim suspended light fixtures throughout. They replaced the damaged wood floors with a textured porcelain tile laid in a herringbone pattern. While it is not possible to completely waterproof the home, the tile provides additional durability to their space.

The homeowners are pleased with the refreshed look of their home, and Truffles the dog enjoys his new nook under the stairway. Says Moorhead: “The homeowners are as nice as they come. The project was a success due to effective communication and the couple’s openness to collaborative ideas.”