Fired Up Friday: With These Rings, I Thee Fed

A weekly barbecue blog for the summer.

Scott Schumaker is president of PacificBasin and interim publisher of Hawaii Home + Remodeling. He is also an avid barbecue hobbyist who often tempts co-workers by posting images of his culinary feats on his Instagram, @schuboxphoto. We have convinced him to share his secrets each week this summer with our readers in our Fired Up Friday blog. His grill smoker of choice is a Big Green Egg he purchased from POP Marine and Fishing. He also uses a Weber Summit gas grill, especially for rotisserie cooking, which he got at AirGas Gaspro Kapolei.

As I progressed through this life stage some call adulthood, I became a bit too gravitationally challenged. Okay, I got fat. To help correct that, I began living healthier and dramatically reduced carbs from my diet. I eventually weaned myself and eliminated any cravings I had for breads, cereals and my favorite, baked goods. But there was one craving I could not beat. I love Maui onion rings. Fortunately, my Big Green Egg and the internet saved me when I discovered — to the sound of angels singing — a recipe for (cue the angels) bacon-wrapped onion rings.

Now, wrapping any veggie with bacon hardly sounds like healthy eating. However, when smoked slowly over low heat, virtually all the fat renders out of the bacon and you are left with a leaner, crispy pig shell surrounding the sweet Maui onions. Still, in a nod to a healthier lifestyle, I also tried wrapping a few in turkey bacon and they, too, were crisp and delicious. The turkey bacon is stiffer and harder to wrap around the onion, though.

I wanted huge rings for three reasons. Larger rings are easier to wrap and they hold up better under the long cook, leaving a bit of a crisp to the onion when it’s finished smoking. Lastly, I love Maui onion rings.

So, I took some large Maui onions and cut them in half. I used the few outer layers only and saved the smaller inner rings to use elsewhere. I also doubled up the rings so that the bacon was wrapped around two layers of rings, not the normal single layer.

It’s impossible to get any spice to stick to an onion, even if using olive oil or barbecue sauce. So, I used the bacon as a carrier for my rub and sauce. Lay the bacon out flat and brush the top side lightly with your favorite barbecue sauce. Come over the top of that lightly with your favorite rub. I like a little heat so used a Cajun rub. Go easy on the sauce and rub as you only want them to enhance the onion, not overpower it.

Then, tightly wrap the onion with the bacon by pulling it through the hole with the sauced, rubbed side against the onion. Continue until the entire onion is covered in glorious bacon. It might take two or three bacon slices per ring, depending on ring size. Secure in place with toothpicks.

Light your grill and prepare to cook using the indirect cooking method. Bring your temp up to 250 degrees. Throw in one large (fist size) or two small pecan wood chunks. Too much smoke will overpower the rings. Place your rings on the smoker for about 1.5 to 2 hours. You will know they are done when the bacon is nearly crispy and has a good bite through. If you want it crispier, you could sear them over high heat after smoking, I didn’t do that because I wanted the onion to be slightly crisp as well. Serve hot and be prepared to hear your family and friends exalt, “I love these Maui onion rings so much I could marry them!” 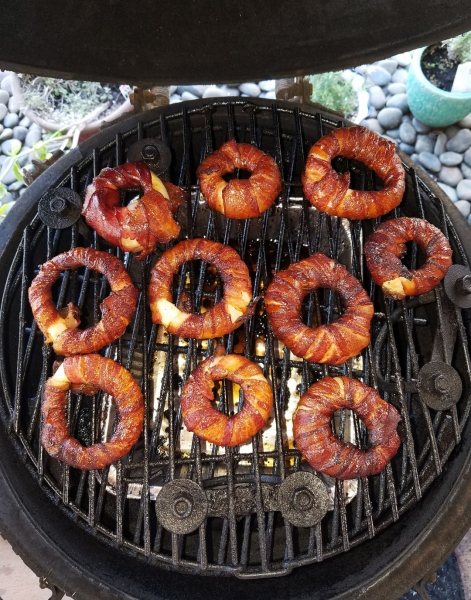 Tips to clean your house fast.