In a city crisscrossed by vast tracts of subdivisions, it’s hard to escape the cut-and-paste quality of mass-produced condominium interiors. Honolulu’s older townhome kitchens are characterized by their economic, but artless, construction. Owners’ efforts to personalize and update their kitchens are hampered by prefab construction and impractical floor plans.

With the help of Homeowners Design Center, the Pregitzers broke the mold by demolishing their narrow, u-shaped kitchen to create a dynamic space complete with eco-friendly features — distinguishing their home’s interior with bamboo cabinetry, a glass-tile backsplash and minimalist LED lighting. 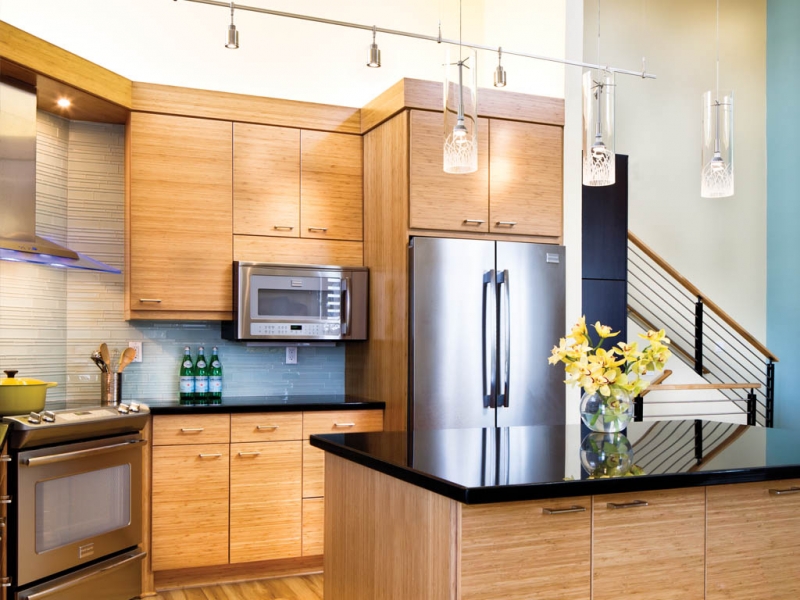 “We made the decision to downsize and moved into a former rental unit that was quite beat up,” says Lynn Pregitzer. “It was obvious from the cabinetry, appliances and discolored linoleum flooring that this was the original kitchen.” With only one way in and out, the kitchen was a dead end and constant site of congestion for the Pregitzers, who enjoy both cooking and entertaining. “We showed the homeowners different options for the kitchen layout using our design software,” says designer Jessica Omoto. “We thought the addition of an island would be a good idea for access and versatility.” 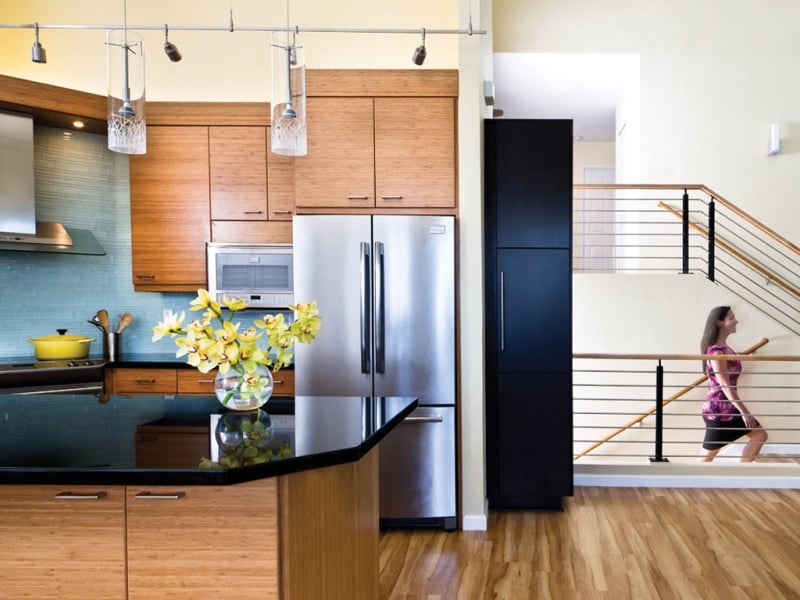 Owner Karl Pregitzer says the addition of the island has made all the difference. “It’s my favorite part of the kitchen,” says Karl. “We use it for everything.”

Surprisingly, the most laborious part of the kitchen project was settling on a final design. “There were so many iterations,” says Lynn. “Homeowners Design Center’s expertise is essential — you may think you have a great idea but the designers make it functional.” Functional, yes, but by no means basic. This kitchen is a hybrid of environmental engineering and ultramodern style — bringing together unexpected elements to create a sleek, but warm aesthetic that makes the most of the condo’s high ceilings and ample natural light.

The designers offset an industrial look by pairing the stainless steel, energy-efficient appliances with strawberry-blonde bamboo cabinetry. The stove, angled across the corner of the back wall, creates a striking focal point for the floor plan by calling attention to the sculptural glass island design of the range hood. Instead of a typical stainless steel backsplash, the homeowners opted for sage-tinted clear glass tiles to balance the dark countertops.

Though the Pregitzers can no longer hide clutter behind the two-tier countertop, they don’t miss the multilevel surfaces that broke up the bar. “We opened up a lot of space by moving the pantry out of the kitchen,” says Karl. With the larger pantry closer to the living room and new drawers set aside for recycling, the design struck a balance between form and function. “You don’t want to have remorse about space,” laughs Lynn. “Where will you put the Costco shopping?”

For some,  a “green” remodeling project may seem like a financial sacrifice with relatively few options. Jessica Omoto considers eco-friendly remodeling to be an element of a healthier lifestyle. “I always ask if the things I eat are going to be good for me, salad or steak? So goes green remodeling,” says Jessica.  “Our CARB 2 Compliant cabinets limit exposure to excess formaldehyde emissions, and new appliances and LED lighting are energy savers.” With the thoughtful guidance of Homeowners Design Center, the Pregitzers’ old, cookie-cutter kitchen has been upgraded to a distinctive eco-kitchen that leaves the neighbors green with envy.