When fairy tales end with the line, “They lived happily ever after,” the illustration shows a house that seems perfect for blissful endings.

The historic Mulvehill residence hidden in the kamaaina neighborhood of Nuuanu is such a fairy-tale house and is now enjoying a private renaissance.

The home, built by prominent regional architect Robert Gaylor Miller in 1925, is a rare model of “Storybook Style” architecture that appeared in the 1920s and was almost forgotten by the late 1930s. The house is hidden by a vertical wall of greenery, with layers of kukui, plumeria and creeping monstera, but designer Amerjit Ghag and design enthusiast Larry Heim peered through the hedges one day in 1999 and fell in love.

Even though the property was not listed, they put in an offer with the help of their savvy Realtor and got the house. They and their two daughters moved in. 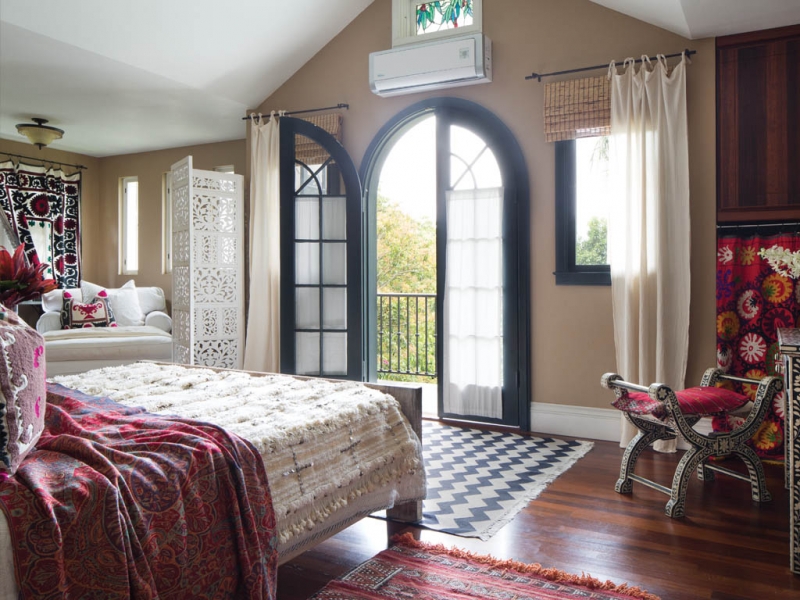 “This home has great bones,” says Amerjit, “but we really had no idea what we were getting into. Part of the home’s foundation was sinking and the termites were everywhere!” With a great deal of patience and some “indoor camping,” the couple worked with award-winning architect Geoffrey Lewis to repair and improve the home in line with its original Storybook Style.

After shoring up the home’s sinking foundation with an anchor system, the couple enclosed the screened-in patio. Lewis took the old windows that divided the grand foyer and lanai and reused them in the new exterior. A new cement floor was poured and stained a rich copper color to match the ipe wood used in the grand foyer and master suite.

Divided into three areas, the large living room resembles Amerjit’s home décor store, CHAI Studio. One corner is occupied by a massive four-poster daybed from Bali. Bedecked in rich-colored textiles from India, Uzbekistan and Morocco, the bed is a cozy nook for reading or daytime naps. Two simple fabric couches hold court in the middle of the room, and offer views of the beloved hens that patrol the backyard. The third section of the room, nestled between the kitchen and dining room doorways, is a casual dining space beneath a gallery wall of black and white family photos.

Despite the relative newness of the room, Lewis maintained the historicity of the residence with bold ceiling beams, a new French door to match the existing set, and wainscoting along the interior wall.

The neighboring kitchen and dining room are the smallest rooms in the house, but they speak to the hospitality of the couple. The marble-rimmed kitchen is a compromise between Amerjit’s desire for a French-style kitchen and Larry’s request for commercial-size appliances. One result is an oversize kitchen island that houses a beer tap for quality libations. Larry, the owner of HonBlue and the Brue Bar coffee shops, seems to specialize in liquid gold. A commercial grade stainless steel oven, clouded-glass cabinets and white marble counters create a deliciously homey feel, amplified by Larry’s signature honey lattes.

In an even cozier alcove of the home is the formal dining room, with rich-hued stucco walls and original glass-bead chandeliers. “The purple is such a flattering color,” says Amerjit. “It makes everyone look good, especially over a glass of wine!”

High above the common rooms and bedrooms is the master suite – an addition that literally raised the roof. The old roof, which needed replacing, was raised nearly 10 feet to accommodate the new 652-square-foot suite, which includes a mezzanine with reading nook, bedroom, walk-in closet and bathroom. The new height left part of the original chimney brickwork exposed — a feature the couple chose to leave uncovered to display the materials of the old house.

Inside the bedroom, Amerjit has selected a headboard made from the shutters and exterior of a traditional Balinese home.
A vanity inlaid with mother of pearl sits just outside the bathroom, which is equipped with a walk-in shower and free-standing bathtub. An extra-plush lounge chair stands sentinel outside the walk-in closet. “It’s where we read or use the iPad if one of us can’t sleep,” says Amerjit.

Reading and sleeping, though a minor activity in this busy house filled with friends, college-age daughters and a clucking flock of hens, are nuanced reminders of the home’s Storybook Style – an architecture so whimsical it seems to belong solely to daydreams or fairy tales. This feeling, of course, would have been lost if Amerjit and Larry had not spied it through the hedges in 1999 and seen something worth reviving.

Master architect Robert G. Miller was known for employing the Spanish Mission style in his designs, but he took an eccentric side trip into the distinctive Storybook Style while creating Mulvehill Residence. One expert defined this genre as whimsical with “a distinct flair for theatre and humor.” This Nuuanu home, already listed on the state Register of Historic Places, has been nominated for the National Register. The nomination notes its evolution “with the introduction of wood shingles and balustrades within screen panels that gives the house a more tactile and storybook feel.”

However, early plans for the residence reveal the architect had originally designed an Italian-style home, built of hollow tile with exterior walls finished with stucco, brick laid-in patterned floors and a terra cotta tile roof. By 1925, the home was finished with wood shingles on the roof and notched wood shingles on the exterior. The columns supporting the archways at the front porch were supposed to be cylindrical, but, in the end, they became squared.

The large, multihip roof formed by the intersection of the bedroom and utility wings with that of the central body of the home form an “H” shape and the steep pitch allows for vaulted interior ceilings. When architect Geoffrey Lewis designed the addition of the second story for Amerjit and Larry, he created a gabled roof area supported by decorative brackets to augment the home’s existing style.

Balustrades within the screened panels of doorways and windows give the house a more tactile and fanciful feel, and demonstrate Miller’s love of fine craftsmanship. A distinctive feature of this style is the consistent use of arches and vaults throughout the space, as well as vertical lines created by the casement windows in nearly every room. Five arched openings, with undersides sheathed in wood shingles to enhance the “homemade” feel, rim the covered front lanai. Three more arched doorways signal the front entry, and screened doors have vertical poles that provide a “playful quality” to the structure. The interior side doors are arched doorways with multiple windowpanes and original brass locking hardware.

The vaulted ceiling in the grand foyer, raised to accommodate the second-story master bedroom, maintains the original feel of the living space and mimics the shape of the vaulted formal dining room.