Inspired by its past, a family renovates a Lanikai seaside house to restore its original architecture and character.

Nearly a century ago, a family from Perth, Australia, carved out just enough space between the splashing surf of Lanikai and the adjacent mountainside to sandwich in a Mediterranean-style house on Wailea Point.

The family of miners brought most of the construction materials in on a barge through the water; Mokulua Drive, from where the house is now accessed, was not yet constructed.

Photographs of the construction remained with subsequent owners of the house after it was built, while the house’s character was concealed by several renovations.The family that has called the house and property home for the past two decades found inspiration in the photographs, and wanted to restore the original architecture of the house. At the same time, they wanted to add modern conveniences and a more open floor plan to better entertain their large extended family.

They began by seeing what exactly was underneath the years of renovations. Their discoveries included a Honolulu Star-Bulletin newspaper from May 1, 1928, wedged inside one of the walls.
“We ripped out a lot of molding and areas that were added to the original home,” the homeowner says. “In that process we uncovered a lot of the original arches in the home. They had been squared off, covered up and the ceilings were dropped, so we ripped all that stuff out.”

Demolition aside, the homeowners enlisted the help of interior designer Jenn Johnson, ASID, of iD Hawaii to ensure the house’s original character was tastefully restored.

“It’s not the typical beach house you see in Hawaii because it has this Mediterranean look to it. We wanted to enhance and restore that, but update it to a more modern layout,” Johnson says.
Turning the house into an open-concept floor plan was a challenge, since most of the walls could not be moved without compromising the structural integrity of the house.

The tiny kitchen was one of the biggest problems.

“It seems like it was a maid’s kitchen, where it was set back and not supposed to be as visible,” the homeowner says. It was far too small for their needs and was difficult to maneuver in and out of, yet its enclosing walls could not be altered.

Instead, Johnson’s design transformed the kitchen into a cozy breakfast nook, and created a new kitchen in what had been the dining room, a much larger space. Her design enclosed the deck with walls and glass windows to create a new formal dining room, which expands onto the deck through sliding pocket glass doors for more casual dining and relaxing outside.

Today, these areas are the gathering places during family get-togethers.

“Now when we have family gatherings, everyone’s in the kitchen and that indoor-outdoor dining area. That’s what we wanted to focus on, that space, and integrating it as a place for family gathering,” the homeowner says.

But they didn’t neglect to change other areas of the house, which grew from three bedrooms to five, three bathrooms to four, and one outdoor shower to two with Johnson’s clever design.
“We couldn’t move any walls, we could only add walls,” Johnson says, explaining that the thick white plaster and archways add to the house’s architectural traits.

An oversize master bed and bath were converted into two master beds and baths, and the addition of a third, smaller bath off the upstairs hall. Each of the five bedrooms has a lanai with an ocean view. Whitewashed distressed hardwood flooring from Pacific American Lumber reinforces the beach house atmosphere in the upstairs bedrooms and hallway, while cabinets from Plus Interiors were installed in each of the new bathrooms.

Johnson’s favorite room in the house is one of its smallest spaces. The “Hello Sunshine” bedroom, as she calls it, has three walls of glass overlooking the ocean and is decorated with yellow accents, a subtle nod to the sunrise, which is sure to wake anyone sleeping in the room. At night, it offers a beautiful view of the sky.

“Right from the bedroom you can be looking out at the Mokuluas and see all the stars above while lying in bed,” the homeowner says.

Every room in the house, even the powder room, has a view of the ocean, and most have a view of the Mokulua Islets, or “Moks,” as well.

Prior to the renovation, Johnson says, one of the best views was from the laundry room. Her design used the existing plumbing to reinvent it as an outdoor bar with a sink. “In order to make it work, we had to jazz up the hot-water heater,” Johnson says. Since it could not be relocated, Johnson concealed the heater with repurposed redwood obtained from Re-use Hawaii. The homeowners can now pass drinks and pupus from the bar, beneath one of the house’s original archways, to their guests sitting on the other side.

Custom concrete tiles made to look like terra-cotta are used throughout the main floor of the house. “We wanted the color to fit more with the beach decor and weathered teak and look a little more subdued and less red,” Johnson says.

The renovated house has not only allowed the homeowners and their three children to enjoy the everyday experience of living on the water, but also has given them more room for their large family to gather at the house and experience it together.

“It’s been a more welcoming home for all of our family to enjoy,” the homeowner says. “The goal of my father has always been to make that a home for the family, for everyone to enjoy. I think that’s the most important thing. It’s fulfilling his goal.” 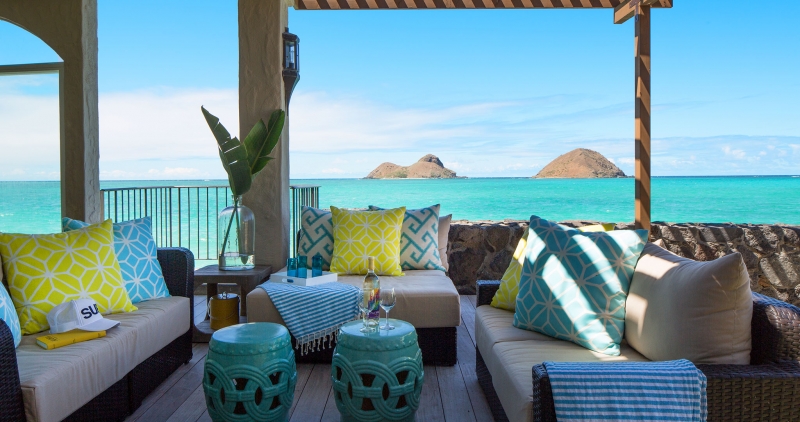 Bring Travel-Inspired Design into Your Home

Statement-making pieces can be found at Bella Pietra Design.