Some homes send a signal that says: “You are meant to live here.” The house that Rebecca and Jordan Kandell bought sent them several of those signals.

They met while they were toddlers, as neighbors in Manoa. Years later, after marrying, they moved in with Rebecca’s parents on Woodlawn Drive while searching for a house of their own.

One day, out for a stroll with their 3-month-old daughter, they left their usual route, headed further mauka than ever before, passed a dead-end sign and entered a cul de sac on Melemele Place. On this street they had never visited, they were intrigued by a green redwood house in the style they’d been searching for.

“Should we knock on the door, see if they’d want to sell it, or at least compliment them on their beautiful home?” Jordan wondered. Instead, he noted the address and researched it when he returned home. Built in 1950 and never on the market, he assumed it was a legacy home that would be passed down through generations of one family.

The next morning their Realtor, Jordan’s mother, Sherri Kandell, emailed the couple with a link to a listing for the house, which had just been put on the market that day. “It was meant to be,” Jordan says.

The mid-century modern house was designed by Alfred Preis, architect of well-known monuments and landmarks such as the USS Arizona Memorial at Pearl Harbor and the entrance to the Honolulu Zoo. He was the architect of many houses on Melemele Place, including his own just a few lots away. Preis designed this house for historical novelist Oswald Bushnell and his wife, Elizabeth, who raised three children there. For the six decades the Bushnells lived in the home, they renovated to meet their changing needs while growing old together.

The Kandells deeply appreciate the history of the home – Rebecca has a degree in architecture and Jordan is a screenwriter – so they feel connected to and inspired by its architect and its original owner, who wrote there. The house was built with walls of windows on every side, offering peaceful views stretching mauka to makai.

The Kandells purchased the home intending to honor, preserve and restore its architectural integrity. “Also,” Jordan adds, “as a writer, to carry on the legacy of Bushnell, who lived and wrote from the home every day. We wanted to make this our legacy forever home, the way their family did, and live here forever. That’s still our plan.”

They obtained the original blueprints along with historic photographs from the Bushnell family, and planned to slowly renovate the house to its original state. But, on the first day of construction, they learned that would not be possible as the 65-year-old walls had extensive ground termite damage.

“The house was being supported by the glass walls of the windows,” Rebecca explains.

Home-building professionals advised them it would be easier and cheaper to tear the house down and rebuild. “But we bought the house because we fell in love with the design of it and the architecture,” Jordan says. “For us, the goal became how to make safer and more modern the original house but keep the integrity of the design and the spirit of the home and the people who lived in it.”

The Kandells turned to interior designer Jamie Jackson to lead the design of their renovation, one that would restore and respect the original architecture of the home Alfred Preis designed so long ago.

They embarked on what turned into a two-year renovation, rebuilding the house from the inside out to re-create its original design, with a few new personalizations. Preis’ blueprints served as a guide for Rebecca and Jordan’s new plans. “What we have now is almost identical to the original house,” Rebecca says.

They removed louver windows and replaced them with safety glass and awnings to match the original design, restored the cork flooring that had been damaged over the years, brought the fireplace back to full functionality, and repoured concrete floors in the bathrooms.

The blueprints show there was originally only one bathroom in the house; the Bushnells added a second bathroom, which the Kandells relocated in an effort to bring back the original three-bedroom layout of the house. Rebecca says built-in, angled drawers were typical in Preis’ residential designs, so they removed the newer, standard drawers and replaced them with the angled built-ins in both of the bathrooms.

Much of the hardware and light fixtures were original and those that could be were restored and replaced in the same spots.

The original 9-inch redwood panels were removed, resanded, restained the original green color and refitted into the house, Jordan says. “We kept the color from Alfred Preis’ original design,” he adds. The green and red color scheme weaves through the house, with furnishings and artwork complementing both its aesthetic and history.

The Kandells made some changes to accommodate their lifestyle. The house was built with a one-car, open-air garage. Today it is a movie screening room and office, and the Kandells park their cars outside in the gated driveway.

The kitchen is larger and more open than the original, but the retro red appliances and cabinets pay homage to the 1950s-era house. The Downsview Kitchens cabinetry stocked with modern, user-friendly features from Details International is concealed by custom laminate doors made by Reiner Arts, which also created the custom laminate island. The countertops, from Todd Branson Stoneworks, are white, yet easy to clean, Rebecca notes.

Many of the furnishings are from the set of “Aloha,” one of the movie sets Rebecca worked on as a studio teacher, working with child actors. Much of the children’s furniture for the Kandells’ 3-year-old daughter, Laia, are mid-century modern finds from online that complement the adult-size furniture. “One of my big goals was to incorporate her play spaces,” Rebecca says.

The outdoor furniture on the screened-in lanai is made of fiberglass, a popular choice for 1950s-era furnishings, which also withstands Manoa’s wet weather.

Now complete, the extensive renovation has given the Kandells a home they are proud of, feel a connection to and can see themselves living in for many decades to come, as the Bushnell family did. 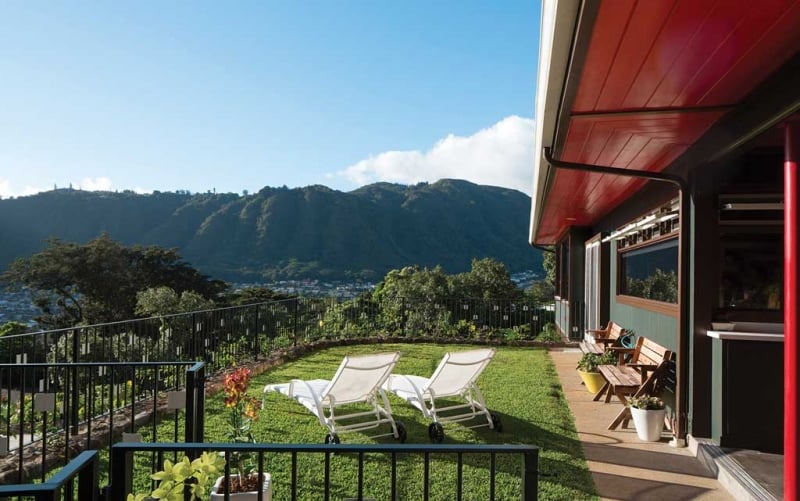 “Going through the nightmare of that [renovation] led us to design what already felt like our dream house into our forever house. Every detail in the house was specifically thought through with a clear intention of how we wanted to move through and live in the space,” Jordan says. “We created our ideal living situation, and how often do you get to say that?”

The house is listed on the state and national registers of historic places.

I used to live in a less than 400-square-foot studio apartment.

Revitalize Your Kitchen or Bathroom with a Unique Backsplash

How to Put Purpose into Every Room of Your Home

Nothing but good intentions.

This Island Home is Built with Purpose

This Oceanfront Property Gets a Landscaping Makeover

Let the Outdoors in with Pocket Sliding Doors