A Hub for Hydrogen Innovation

In 2050, hydrogen power and clean energy are a staple of everyday life in the Islands. Imagine if geothermal energy pumps, airborne wind turbines and solar-powered facilities could power the life in our streams, the lights in our homes and the transportation of goods across the ocean.

A tuft of pure stream emerges from the tailpipe of a flatbed truck. Upslope winds deliver it heavenward, to be adopted by the family of soft cirrus clouds that hang aloft Mount Hualālai.

In 2050, hydrogen power complements the array of clean energies that sustain our islands. It is an energy that renews itself within the natural cycle of hydrology: evaporation, condensation, precipitation.

The power required to catalyze the hydrogen production process is entirely generated on-site. Below the ground, geothermal heat is the primary resource, concentrated through closed loop compression systems. On the surface, bladeless wind turbines oscillate in the vortices of sea breezes without harming the rare petrels that fly ashore to nest. And hundreds of meters up, airborne wind turbines hover in persistent, high-altitude air currents, transmitting kinetic energy back to earth via hardwired kitelines.

Even the research and production facility itself is a battery, every facet coated in a translucent membrane that absorbs solar energy. Here, hydrogen innovations are born, to be later factored into sister facilities on three neighboring islands before meeting energy and transportation demands around the planet.

Deriving constituent hydrogen from H2O starts with a process known as electrolysis. Rain catchment systems, wind moisture screens, and stream micro-tributaries channel water through purifiers and into shallow catalytic pools. Hawai‘i engineers on the verge of a global breakthrough in forward osmosis, say that, soon, even ocean water will be a viable, low-effort input.

A strong current of electricity flows through the electrolyzing pools from cathode to anode, splitting water into its base elements. Oxygen (O2), a byproduct, is pumped to feed juvenile fish that swim freely in neighboring incubation tanks. The fingerlings wander into inland fishponds on high tides, and then into the tanks through a series of sluice gates. On a diet of oxygenated water and estuary fauna, they soon grow too fat to return to the ocean, becoming food for the island’s populace.

At each destination, the air freighters safely dock in a skyport. Sky stevedores pilot lighter-than-air forklifts to unload cargo onto delivery vehicles on the surface. Hydrogen gas is unloaded into local above-ground tanks, where it will fuel delivery vehicles, exit as pure steam emissions, and re-join clouds to return as rain.

About the Artist: Lauren Trangmar 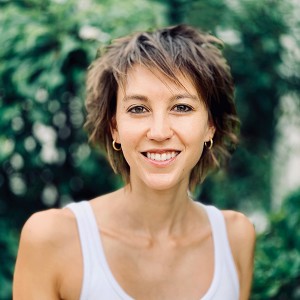 Lauren Trangmar is an artist, illustrator and graphic designer with roots in Hawai‘i and New Zealand. She specializes in highly detailed illustrations that reference historical, scientific illustration with a contemporary, whimsical twist. Her recent work explores themes such as the relationship between storytelling, culture, myths and history, art, science and the study of natural history. Her work is featured in public and private collections throughout the United States and New Zealand including the Honolulu Museum of Art and the Hawai‘i State Foundation of the Arts and Culture. 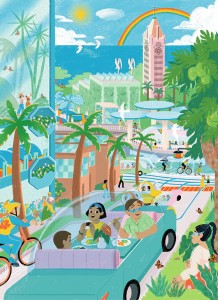 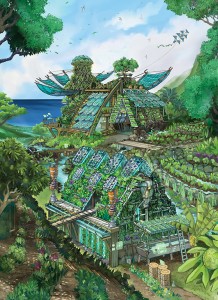 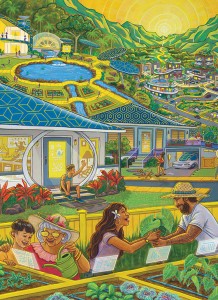 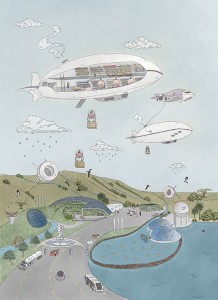 Revitalizing Communities with Streams and Sunlight

At the center of this Hawaiʻi of Tomorrow piece, a continuous stream feeds life everywhere it flows. Local artist Kate Wadsworth illustration pays homage to the restoration of Indigenous systems that have existed for generations in Hawaiʻi.